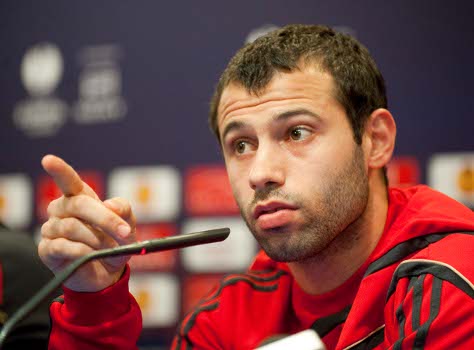 "I'm not kidding---no more questions about dinosaurs. They didn't exist."

After the trip heard 'round the world, Liverpool and Atletico finally face off.

It's a boost for Ngog, whose performance on Monday likely pushed him over the top into a starting role. We got the central midfield we expected, with Lucas and Masch partnering behind a Kuyt-Gerrard-Benayoun advanced midfield.

Gee, here's some encouraging yet sobering news: the FA confirmed that Portsmouth are ineligible to play in European competition next season, leaving Liverpool in a spot where qualifying for some sort of continental football is an actual possibility. I'm not sure how this is good news, but eventually it must be. For now, it's doubly humbling---Liverpool likely aren't good enough to qualify for the Champions League this season, so they slide in the backdoor to the Europa League because the team that should have qualified is in such ruin that an application for European competition wouldn't be accepted. Liverpool 2009-2010: Catch the fever!

Two pieces from this interview with Roberto Mancini, he of the delicately manicured scarf persuasion, neither of which is surprising: first, he's pronounced that every club in Europe would like to have Fernando Torres. And all he would need to do is "decide" about the player. Nevermind that he's ready to go back to Italy. The second bit is that there's controversy surrounding Craig Bellamy. At times you can't help but feel slightly bad for the Welshman, who draws criticism even when he's playing well and seemingly trying to remain anonymous. And then he swings a driver at you and all is lost.

Our banner pic hero joined Rafa for the pre-match press conference, and despite what the caption suggests, there were, unfortunately, not any questions about dinosaurs. I don't even know where that came from, I think I just like the idea that Javier Mascherano has insane theories about dinosaurs, moon landings, and time travel. But he's deliciously quotable anyway, with tidbits like, "If you lose in a final it's because you got there." He's like the Yogi Berra of this Liverpool side, and, as the British press showed us by live-blogging every travel-related fart and burp between Liverpool and Madrid, he can even read a book!

And lastly, it wouldn't be a match day without some sort of Rafa Benitez news, so here's an Ian Rush piece about why he thinks Rafa will stay, and quotes from the man himself about the plan of attack (literally---wordplay!) against Atletico. Regarding Rush's piece, his main point seems to be that the Spaniard's tenure won't be negatively impacted by a change in ownership, and it's hard to argue with that. If anything, you'd expect any impact to be positive. As for Rafa's thoughts on how Liverpool approaches today's match, it'll be interesting to see if that actually comes to fruition. History tells us that it won't, and given Liverpool's success in the last two legs of the competition, I'm not sure there's any reason to change. It would certainly be more aesthetically pleasing, but Rafa's never struck me as someone who weighs that very heavily.