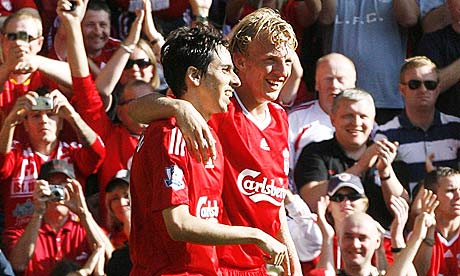 Why celebrate when it feels so good to be unhappy?

Let's get the objective out of the way: Liverpool were dominant in every facet of the game against a quite poor West Ham side today. Yossi Benayoun notched the first through some fine nipple control, David Ngog got the second, and the Greek mind-f***ed Robert Green into allowing the third to ricochet off his leg back into goal. There was really no chance that West Ham were going to fight back in this one, even if Liverpool were interested in ceding any sort of control. The statistics don't lie today (skillfully plucked from Soccernet): 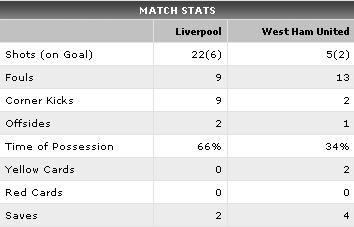 Of the two shots on goal for the relegation-troubled side, neither was much of a bother for Pepe Reina, and the forward movements they did manage never really looked too bothersome. They looked every part the weaker side, and Liverpool rode out the final thirty minutes, likely more, very comfortably. The absence of Fernando Torres was no worry, as Ngog, Kuyt, Maxi Rodriguez, and Benayoun proved too much for West Ham. Steven Gerrard had his run of the place, and the defense (Pepe Reina especially, in gaining another clean sheet) very nearly went untroubled.

Why, then, am I left feeling that even at 3-0, Liverpool didn't do enough? The pain that comes along with this one is not of a statistical manner---how could it be? But there's a disappointment that now accompanies every league match for Liverpool, a sort of qualitative loss that is only present when the the game itself matters very little. I'm likely engaging in even more self-pity and complaining than is necessary, as there is nothing done and dusted in this campaign.

Maybe it's that at this point, it's simply not possible for Liverpool to do enough. They're far off the pace of matches that really matter---those being played by Chelsea, by United, and, until this weekend, by Arsenal. As far as the league campaign goes, the only real taste of importance will be on May 2, when Chelsea visit Anfield in an undoubtedly massive game---for them.

It's been a season of discontent in league, one marked by disaffected performances both at home and on the road, underachieving at nearly every turn. So tonight, even in dominating the match in every fathomable way, the numbers don't really seem to do anything for me. Even the celebrations, the applause, the "feel good" pieces that are, you know, supposed to feel good, somehow didn't.

This is certainly nothing new, as Liverpool have been drifting in the league campaign for some time now. I think I've mentioned more than a few times that it's the sense of irrelevence that is the most threatening for Liverpool, and I think that tonight, even in a match in which our boys were clearly the better side, it hit me like a sledgehammer. 3-0? To West Ham? Eh. What's it mean?

It could be the finality of the calendar that's got me in another existential crisis. But if you left this one feeling entirely content with Liverpool, I'd love to know how. And while Thursday is a different story, at least in terms of the potential for silverware, I'm still struggling to make much of it.

I realize that this is completely unfair---what else are they supposed to do? They get a win they need, clearly playing for their pride and their supporters at this point. Like I mentioned, though, it was almost paradoxically a reminder of the shortcomings of a tough league season. Perhaps even more unfortunately, it's likely one that will manage to give us hope again, and that's maybe the scariest part.