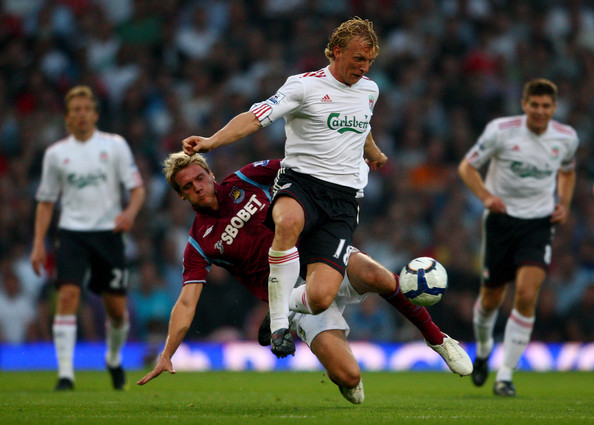 The show must go on---lineups are in.

With those names it's got to be a 4-4-2, and that limits the number of options in the midfield area. It makes sense, though---neither Kuyt nor Ngog has flourished as the lone man this season, and ideally Kuyt's industry gives Ngog the space he requires. I'd expect Lucas to have a good match today, as he typically flourishes when he's not paired with Javier Mascherano. The partnership with Gerrard gives him a bit more role definition, and we've seen him do well in the past when he's not simply there. The starting eleven leaves three attacking choices on the bench: Alberto Aquilani, poised for another 10 minute cameo; Ryan Babel, who's a 65-minute sub almost certainly; and Nabil El Zhar, hoping to work his way into a semi-regular role. What's the over/under on how many times the absence of Fernando Torres is mentioned on the broadcast?

It's as expected for West Ham up front---Carlton Cole and Ilan leading the way. I'm still waiting for a team to try to work Daniel Agger down their right side...not familiar enough with West Ham to know if they have the skill to do so. As I mentioned yesterday, he's tended to drift centrally in the few times he's deputized at left back, particularly in attack, and that could spell trouble on a West Ham counter. Yossi Benayoun does a decent job of back-tracking, though, and it'll be especially vital tonight.

It's fashionable right now to spread panic about Fernando Torres staying or going after he's recovered, so in anticipation of the cryptic readings of his post-surgery comments, OMG HE"Z LEEVINNNG 4 SPANE!!!

"I would have loved to return to Atleti and come face to face with the fans again, but I will have many more opportunities in the future."

Duh, it's right there, he will have many more opportunities in the future to play against Atletico Madrid, meaning that he's joining a team in La Liga!#@! Actually, here's the full content of the interview, which sheds light on the fact that he played nearly the entire second leg match against Benfica with pain...and scored twice anyway. There's obviously nothing there to refute the rumors that this equals the end of his Liverpool career, but there's nothing to support it either. Glenn Beck would be proud---"I'm not saying Fernando Torres is leaving, but don't you find it curious that he hasn't denied these rumors? Makes you think, doesn't it?"

On the heels of this, Rafa has been asked to comment about the squad's ability to cope with injuries this season, and in typically pithy fashion, the Spaniard states, "We have had too many injuries this year." I'd say. The injury/suspension tracker on the official website has now become one of my top bookmarks---partially because I know I will never be disappointed for content, and partly because I've reached a point of self-loathing and pity that I imagine I'll one day be able to create a fantasy starting eleven from the names there. At one point this season it was looking like a damned dangerous front four---Torres, Steven Gerrard, Yossi Benayoun, Ryan Babel, etc. etc. So anyway, good point, Rafa.

As for other news, the Europa League matches for this week have gotten the go-ahead after serious doubts regarding airline travel. The volcanic eruption in Iceland had cast doubts on every European match this week---UEFA announced yesterday that the Champions League matches would go ahead, so you knew it was only a matter of time until the step-child was acknowledged. Some of punch of this tie has obviously been taken away by the news about Torres' injury, but it's still a European semi-final, and Liverpool are still one of only two teams from the Premier League left in European competition.