On the Market: Liverpool F.C. **Updated**

Share All sharing options for: On the Market: Liverpool F.C. **Updated** 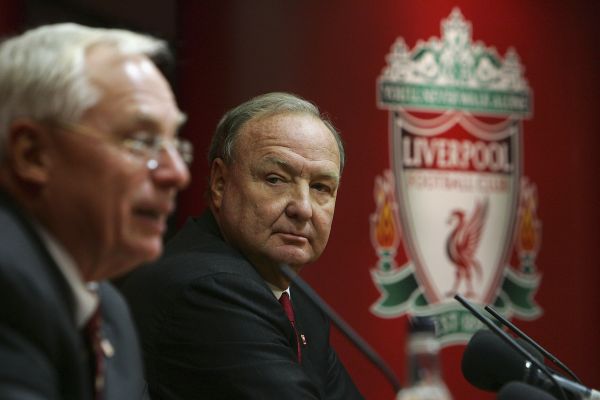 All that's left now is to drape a Mission Accomplished banner from an aircraft carrier.

Coming off an undoubtedly heavy day yesterday, news this morning that will likely buoy even the most affected of supporters. Tom Hicks and George Gillett (aka "Yanks," "Cowboys," "Money-grubbing c***s") have hired Martin Broughton as Chairman, a move put into motion in order to start a formalized sale process. From the article at the official site:

Mr. Broughton, currently Chairman of British Airways PLC and deputy president of the Confederation of British Industry, will work alongside the club's existing management team of Managing Director Christian Purslow, Commercial Director Ian Ayre and Financial Director Philip Nash. The day-to-day running of the club remains in the hands of this team, who have overseen a significant improvement in the financial performance of the Club since 2007. During that time:

* The Club's revenues have increased by 55%;

* Commercial revenues have increased by 83%;

* Operating profit (before player trading and exceptionals) has increased by 60%.

The Club will continue to progress the well-advanced plans for a new, larger, and state-of-the-art stadium which will form an exciting part of the club's future development.

The article unfortunately doesn't include any quantification of the drop in hope, belief, or optimism that has taken place since Hicks and Gillett rode into town. Also from the article:

Thomas Hicks and George Gillett said: "Owning Liverpool Football Club over these past three years has been a rewarding and exciting experience for us and our families. Having grown the Club this far we have now decided together to look to sell the Club to owners committed to take the Club through its next level of growth and development.

"We are delighted that Martin Broughton has agreed to take the position of Chairman, working alongside the club's excellent senior management team. Martin is a distinguished business leader of excellent judgment and with a great reputation. He is a genuine football supporter and will seek to oversee the sales process in the best interests of the Club and its supporters."

I wonder if they can even see far enough past their own noses to recognize the idiocy of any statement that starts with, "Having grown the club this far..." By all accounts their time with the club has been a resounding failure, causing even the most faithful of Liverpool supporters to pause and rethink the way in which they interact with their club.

I don't know what the market is like for the sale of a football club,but with their history and brand, Liverpool have to be seen as an attractive proposition. I do worry about the impact this could have on summer transfer funds, as an impending departure might be seen as another reason not to provide any cash. And the club will also likely sell for a bit less than its worth, given the struggles on the pitch this season and the piling up of train cars that's occurred off the pitch for three seasons now. But whoever ends up purchasing the club, I'm hopeful he/she/they will keep to their word, finance the club in a proper way, and oversee actual "growth."

First, some selected comments from the new chairman:

"My role is to make sure Liverpool is successful in the future. It is now very important that we find the right owner - not just a new owner. I ask for patience from the fans. They want to get what I want to get - not just the highest bidder but the best bidder in the long term. My message to the fans is this: have a little bit of patience and in a little bit of time I'll deliver.

"The key point is that this will make a difference. It will clarify the ownership position going forwards. And I think what's been hanging over the club in many ways is doubts about the ownership, the debt position etc. This will clarify that, so it will be a very good thing for the club.

The past three years gives us reason to be wary of promises about brighter futures and returns to glory, but it also gives us a chance to hope for something better.

And as always, an understated response from Rafa:

"We have a new chairman and he's in charge of all these issues. At this moment, for me as a manager, I have to focus on the West Ham game. I think the club is moving forward and that's positive.

"It could be positive, we will see - but at this moment we have important games to play. We have West Ham on Monday and after that the Europa League against Atletico Madrid."

Clearly he's got some reservations of his own, and he deserves to, especially with the somewhat turbulent relationship he had with Gillett and Hicks. I think adequate backing might change Rafa's fortunes on Merseyside, but only time will tell. Let's hope the sale process goes well, and come next season Liverpool are ready to roll.