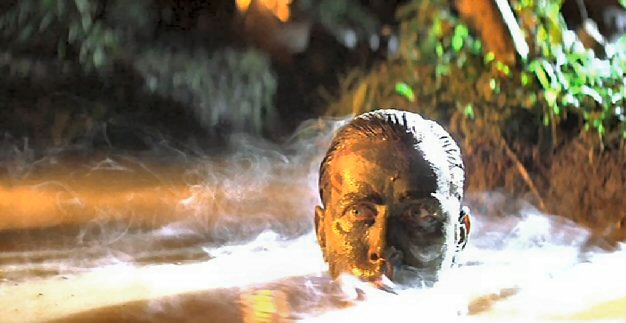 Probably best to just stay underwater at this point.

Back in late January, right after Liverpool had put in a feeble display at Wolves, I took to the bottle and hit the keyboard. Unfortunately, as it were, the post seemed to resonate a bit with others. But then Liverpool started to turn things around. We saw some drive from the side, regardless of the fact that they were struggling through injuries and suspensions. They grinded out some positive results, sweeping Everton and advancing in the Europa League. For all intents and purposes, Liverpool were headed back in the right direction.

And then they travel to the DW yesterday to face a Wigan side that hadn't won a match since early January, and hadn't won a match against Liverpool since the game was invented. So, of course, Liverpool shat themselves for 95 straight minutes and managed to add to the arsenal of embarrassing performances we've seen this season. And just like that, they're right back where they were after the limp display against Wolves.

I don't know whether it's the depression or just a severe case of masochism, but I decided that I'd spend the day re-watching the match to take in just how bad it was. I figure I got so blinded by rage that I couldn't really think about what went on, so it's worth another viewing. Or, masochism. It's sort of a liveblog, sort of a reflection, definitely way too long. Here's what I came up with:

** Joe Royle's comment while listing the Wigan starting eleven: "It's going to be a hard night for Wigan." In hindsight, nothing could have been further from the truth.

** Likewise, Jon Champion refers to Dirk Kuyt as "the scourge of Wigan." Yesterday, not so much.

** The playing surface, regardless of its freshness, really did look like shit. The close-up camera clearly showed some ruts in between the turf. It's a wonder nobody took up part of it or screwed up a knee. Champion's remarks about which team it will suit were null---it didn't suit either, but Wigan's commitment and Liverpool's lack thereof made it irrelevant.

** "Liverpool using their defeat to Portsmouth to make sure their mental approach is right tonight." Sadly, it would turn out to be an exact replica, just with slightly different players.

** There were 4,000 Liverpool supporters in the stands, which Champion stated made up nearly a quarter of the total attendance. To see Liverpool play like that. Sheesh.

** First indicator that something is amiss in the land of Steven Gerrard (at least for this match): After a fine run and cross by Javier Mascherano down the right side in the fourth minute, a clearance goes straight to Gerrard, who puts it into the 40th row. Half-committed volley that didn't seem to bother him too much.

** Another indicator: two errant passes in two minutes. Whether its the pacing of the new pitch or not, just not like Gerrard in years past to be so careless. Certainly more to come.

** For what it's worth, Yossi Benayoun was damned lively in the opening passage of play. He skipped around a few defenders on a number of occasions, even if his 8th minute effort was destined for the corner flag before deflecting off a defender.

** Steven Gerrard from corners has not worked a treat this season, but it nearly did from the corner won in the aforementioned move by Benayoun. Maxi heads the clearance back across to an unmarked Torres, whose volley beats Kirkland but only finds the outside of the post. And that'll be about the last time I mention a Liverpool threat.

** There was a time in the past that Gerrard from thirty yards unmarked was lip-smacking stuff. Now? No worries, just dribble more and choke.

** Wigan string together a few threatening runs, first to Rodallega from N'Zgobia, then a cross is headed away well by the Greek.

** More dangerous stuff from N'Zogbia, who smashes across the face of goal and narrowly misses Moreno and Rodallega. Liverpool never recovered from this figuratively, and only on a couple of occasions did they recover in the literal sense.

** Fernando Torres is not a striker. By the 15th minute, he has already collected the ball on the wings and in Liverpool's own half than he would for the rest of the match. What does that tell you about this side's ability to create?

** N'Zogbia outskills and outmuscles Insua again, not yet to the 20 minute mark.

** First yellow card for Liverpool, awful challenge by Insua on N'Zogbia. First of way too many petulant challenges we'd see on the day.

** Torres tracks back and wins possession back for Liverpool. This tracking back = good. The tracking back that led to his yellow = immature and unimpressive.

** Maybe Masch on the right wing would work when Glen Johnson comes back. Already posed more of a threat than any other occupant of that spot all year.

** Nice interchange by Kuyt, Maxi, and Benayoun to lead to Gerrard's scuffed effort from six yards. Maybe it would have been more useful to have those two centrally, as both were able to create in bursts from the edge of the final third, but only from the middle of the pitch.

** Another yellow for Liverpool, this time for Lucas. A slow, untimely stabbed-out leg by him. What a novel idea.

** More uninspired stuff from the captain that can't be written off the way it was by Champion and Royle: by talking about how he's played out of position.

** Gary Caldwell and his "Scottish determination" stand up Torres on the edge of the box. Effective strategy by Wigan---get physical with the one attacker. Not too tough to figure out.

** A third yellow for Liverpool, Kyrgiakos gets a little overzealous with his knee. Was Sam Allardyce actually right?

** Jesus, Lucas was bad. Already given possession away more than I care to count, this time it's a meek clearance that travels about four feet, giving Wigan the ball back and ultimately leading to Rodallega's winner.

** Obviously it wasn't just Lucas' failed clearance---the back pass from Kuyt was inexplicable. On first viewing yesterday I thought it was the surface that was responsible, but after seeing it again I just don't know what he was thinking. And it confirmed my thought from yesterday that we do indeed know what a Jon Champion orgasm sounds like.

** Gerrard makes a point of calling out Dirk Kuyt for not moving more centrally. Inspirational.

** Tough chance for Torres in the 43rd minute after Maxi tracks one down and crosses. Just as you would want, the two best chances fall to Torres. And the third fell to Gerrard earlier. What the hell is the problem?

** First show of pouting from Torres---whistled for a foul after battling for a long ball, throws the ball towards the linesman. "They look a bit frustrated out there." You think so, Jon Champion?

** No changes at the half for Liverpool, and I gotta be honest---the first half wasn't that bad. A few shaky moments, but it wasn't like we saw this brand new Liverpool that was completely impotent in attack. Maybe with the knowledge of how the rest of the match would play out, we saw a few indicators of things snowballing, but not blown away by the mediocrity yet.

** And in the first few minutes of the second half I was---handful of threatening attacks for Wigan, Torres getting more and more testy, and not a whole lot to shout about.

** Another missed chance from Torres, who is the beneficiary of more good work by Maxi. But he again fails to test Kirkland, and you can see it growing. Or disappearing. Depending on your perspective.

** Good to see two things with Glen Johnson coming on: one, that he's back from injury, and two, that it's Lucas coming off. Sad that it didn't amount to anything.

** Despite his obvious frustrations, Torres is clearly the most skilled player on the pitch after trying free up Dirk Kuyt. The pass was heavy, but he rounded a defender with little difficulty.

** I don't think Moreno's deflection would have gone in, but it wouldn't have been a complete surprise. Smart work from the Greek to head over.

** "It's expectation, though. They looked like they'd be serious players for the championship." Bingo, Joe Royle.

** Really consistent, resolute defending by Wigan regardless of how poor Liverpool were. Could have been different with a little conviction, but still quality stuff from the Latics.

** Seeing Yossi Benayoun take a corner was nice, seeing how he took the first of two was not. The second wasn't much prettier, but it at least had a little elevation. Subsequently taken off for lord knows what reason.

** Alberto Aquilani sighting! Great thought on this from a buddy via text: "Isn't it a little early for him to be coming on? It's not the 85th minute." Oof.

** Wigan's substitution, bringing on Victor Moses, clearly indicates the type of threat that Liverpool imposed. And that would be none.

** Liverpool's defense continue to be overwhelmed, this time with Rodallega playing in N'Zogbia, whose shot was saved by Reina and was nearly poked in by Scharner at the far post.

** Insua's cross that Kuyt headed to Torres was to be as good as it got for Liverpool. Torres had a ton of time to gather, with not a defender on him, but instead opted for the volley. Had he let it drop or taken a touch it might have ended differently, not to mention that Maxi and Aquilani were laying in wait. But shit, it's Fernando Torres. He scores those.

** Here's the moment that it spins out of control---Torres gets knocked down by Caldwell in the 78th minute and gives him a couple slaps in the face. Play goes on, but a minute later we see Torres dispossessed, then track back fully forty yards and deliver a spiteful challenge that leads to a yellow. Et tu, Fernando?

** Soon after, Gerrard gets booked and gives Andre Marriner the dreaded "V," which has obviously taken on a life of its own in the tabloids.

And it's here that I stop. Nothing going in the final ten-plus minutes despite the clear need for at least one goal and the somewhat energetic play of Ryan Babel after coming on. Plus I've written in 1500 words what I could have in four: Liverpool were just bad. My reaction to yesterday was tempered a bit, but it's mostly due to the fact that I'm not convinced Liverpool are capable of much more right now. There were a few performances to pick out: Maxi was okay, Masch had his moments, Aquilani had flashes of skill, and Babel was again a taste of something different. But it was the supposed leaders of the squad that really disappointed. If they're the ones to define the team, both in performance and attitude, what do we take away? Gerrard was poor in both and is lucky to escape an FA fine, Torres was poor in both and was probably lucky to not get booked twice. Dirk Kuyt and Jamie Carragher were at least only poor in their performance.

It's been an internet-wide fallout after yesterday, and nobody knows where Liverpool go from here. There is no certainty about how this season finishes or who will be around after it's over, but as today's Champions League near kickoff, I think we're nearing certainty that next year's version of that same competition won't include Liverpool.