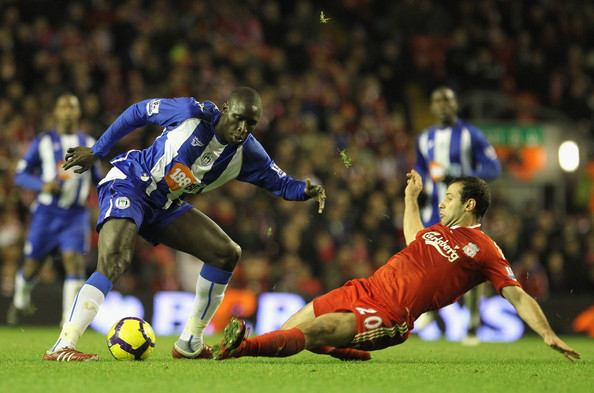 Off to the DW in search of three more points.

Game shown live on ESPN2HD in the States.

After a weekend in Las Vegas, I am of little use to anyone. It's better to leave me alone right now. Here's a clusterf*ck of quotes:

"In the Premier League you don't have too many easy games. Wigan are a club fighting for relegation so it will be very difficult for us. Because Wigan are at the bottom of the table people will say 'You have to win this game', but we know it is not just this one.

"When you have been injured for a while, it's not easy for a player. Then when you are available and the team isn't doing well, it makes it even more difficult. You have to decide if you can afford to give him two or three games when you know he's maybe not at the level he could be, so you could end up losing some of them. Alberto isn't stupid. He knows the priority now has to be the team and what's best for that. All he can do is keep training and making sure he is ready when we need him."

Alright then, consider my optimism neutered.

"Every football club has different expectations and, in that respect, you have the same pressure to achieve that aim. We all know Liverpool is a glamorous football club, it's got a great history and that brings added expectation. In that way, it is always going to be very demanding.

"But, in our situation, we have been through a huge transitional period in terms of the way to play and the way to try to win football games. Wigan are in a position now where we have to be successful in our aim of staying in the Premier League to allow us to go onto another level."

A bit flattering to say that in their current state, Liverpool are a "glamorous football club," but point made about how expectations impact our perception.

Honestly, that's gonna do it for now---pretty weak stuff, I know, but I think the glare of the monitor is causing me to dissociate. Check please.