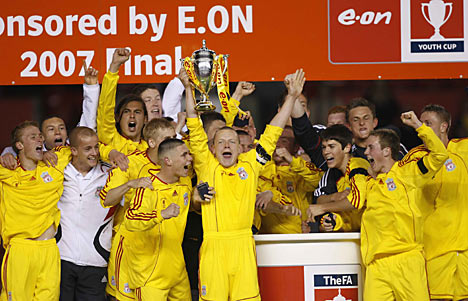 Nearly a decade after we started, nate and I wrap it up.

Part VI. Planning for the Future

Ed: While it's taken a little longer for this to wrap up, I think it's as good a time as any to talk about the groundwork Rafa is laying for his future at the club. I'm speaking, of course, about the much-lauded capture of Raheem Sterling from QPR. He's apparently quite the young talent, and at the tender age of 15, there's plenty of time to get him developed in the Academy. Or, as it's been put by some commenters on the Liverpool Way, plenty of time to coach out any natural ability he's got. Wait, what?

The development of the youth system under Rafa Benitez has been an area of heightened criticism for quite some time. Obviously everyone references Arsenal as though they constantly turn coal to diamonds with their young talent, and in many cases it's with good reason. But there's always a certain amount of gambling involved with younger players--they could go the way of Gerrard and Carragher, or they could go the way of...those guys we never heard of that never made it. And that happens at any club, not just Liverpool. Even Arsenal!

But of course with Rafa it's a production, and the major talking point for me is the "doesn't give young players enough of a chance." On the one hand this is something that makes a lot of sense and is pretty concerning. There's players like Nemeth and San Jose going out on loans and then, if you're to believe the media, working towards making those loans permanent. It's one thing to bring in plenty of young talent, it's completely another to bring in that young talent and never give them any time on the pitch.

Of course, the opposing point to that is that player development takes time--sometimes lots of it. There's always going to be a bit of settling in period for a new manager, and the first team responsibilities are the top priority. And we saw Rafa slowly but surely take control over the Academy, particularly with the overhaul at the end of last season, which saw him dismiss some major figures in the youth system (Gary Ablett, Hughie McAuley, Dave Shannon, and Piet Hamberg) in an effort to get more players from the Academy to the first team. Appointing Jose Segura, formerly the Barcelona youth director, further indicated Rafa's commitment to the Academy, and the return of Kenny Dalglish in a "senior role" seemed to cement it.

My hope for this section is that we'll look at two major things: what Rafa's done thus far, and what it is that he seems to be gearing the club for. So to address the first part, how do you think he's done? What more could/should he have done as it relates to the club's younger talent?

nate: The best thing about Raheem Sterling's capture – outside of the obvious fact he's a highly-lauded English prospect – was pointed out in by a commenter on my blog (Hi Georger!). He'll have the best nickname in history. "Sideshow Raheem" will never be topped.

But seriously, it's still hard to gauge Rafa's capacity for planning for the future even after almost six seasons. It takes that long for these players to develop, and such was the state of the Academy when Benitez arrived. We're just now seeing sown seeds reaped with the likes of Insua, Pacheco, Kelly, Spearing, and Ayala. Kelly and Spearing both came from the Academy, graduating in 2007, the same summer Pacheco and Ayala came from Spain at 17. Insua came to Liverpool having just turned 18 in January 2007. And the likes of Nemeth and San Jose, also signed around the same time, don't seem far away. Benitez's first crop of youngsters – Barragan, Roque, Hobbs, Antwi, and Anderson – didn't have the hoped-for success stories, but the next crop seems much more promising, and are just starting to get their chances.

I wish I saw more of the reserves and Academy; yet another pitfall of being on the other side of the ocean. But there are rumblings – good rumblings – about players in each of the age groups after Pacheco/Kelly Spearing/etc. Gulasci, Mavinga, Dalla Valle, and Bruna in the reserves; Ince, Pepper, Coady, Ngoo, Wisdom, Suso, and Sterling in the Academy. And it's a healthy mix of English and European players as well. But it'll be years until we know how successful they truly are.

I don't want this to turn into another Houllier-bashing session. Houllier was great for rebuilding Melwood and the Academy. He may not have been able to develop the young players, but he knew what kind of facilities and programs were needed. However, the quality of Academy products, whether English or foreign, dwindled to a trickle under Gerard. Liverpool's just now recovering, whether it's in young foreigners (Insua, Pacheco) or local products (Spearing, Kelly).

Kenny coming back can only be good news for the local production line. Liverpool has been losing too much Merseyside talent to the lot across Stanley Park – Rodwell and Baxter immediately spring to mind, and there are rumors Pepper may join them. Both Carra and Gerrard wrote glowingly about Dalglish and his influence on them when they were Academy products in their autobiographies, even if Heighway was more important to their development. Even kids today still remember Dalglish's exploits as manager – nearly 20 years after the fact – if not as a player. That's the kind of legacy King Kenny has, and that alone should help Liverpool recruit better talent.

Before we get ahead of ourselves, I feel duty-bound to note that young player development isn't entirely Rafa's department. Don't get me wrong, the manager identifies targets, hires staff like Segura, Shannon, and Ablett, and promotes players to Melwood. But he's not their hands-on manager, and thus, can't truly be blamed if starlets fail to pan out.

I don't know what more he can/could have done. Scouting youth talent is like throwing at a dartboard from 40 yards away. Sometimes you get lucky, sometimes you even hit the bullseye, but there are just as many, if not more, misses. At the least, Rafa has been diligent about revitalizing and broadening the scouting network, signing talent, and giving young players chances, even if we'd like to see some thrown in the deep end sooner. But, like with many things Benitez, conservatism usually rules the day.

Liverpool needs to get back to producing homegrown talent, at least one or two per generation, no matter whether they were born in L4, London, or Madrid. So far, little by little, it looks like we might be reaching that goal.

E: And as for the goal of making sense of Rafa Benitez, I think I've gone about as far as I can go in the effort. In one way or another, I feel like we have nearly touched on it all. And that which we haven't touched on was noted in comments, but had we tried to address those this would have accompanied the 2010-2011 season preview. Looking back, though, I'm not sure any sense was made, certainly not for lack of effort.

I'd usually be more unsettled ending this way, without any sort of definitive conclusions, but this was always going to be a fool's errand. As long as Rafa is at the club, it seems like there will be some sort of unanswered questions, disconnections between he and the media, and questions about what he could have or should have done. Even the six sections we used, in hindsight, weren't nearly enough. Sure, we touched on it all, but without any more than a casual/bordering on obsessive understanding of the way Liverpool operates from an ocean away, Rafa's going to be a mystery.

But more than anything, I think this provided some much needed perspective. Particularly on my end, it's easy to jump to conclusions about the way Rafa has handled his role as manager in the past five and a half seasons. The "what have you done for me lately" mentality is easy to come by, and I have been no different when it comes to Rafa. But going through this, taking a step back and looking at the "facts," has me questioning the knee-jerk reactions I've previously made.

It doesn't leave me convinced, though, and if anything I might be more confused. I'm convinced he's too stubborn and set in his ways at times, but then he pulls off some of the most magical bullshit-seeming tactics and leads the side to stunning victories. He's alienated players and underused others, but he's helped players like Pepe Reina and Fernando Torres flourish to ridiculous heights. He cuts a stoic figure on the touchline and in the pressroom, but then he can cut it loose and serve up members of the press and Alex Ferguson. I quit.

So it's been a long haul, and I'm greatly appreciative of your willingness to take part. Hopefully it's been more worthwhile than it has been confusing for you and your readers.

n:Isn't this the fun of having blogs? Of watching countless matches and writing countless words? To second guess paid professionals for a "hobby?"

There were never going to be any definite conclusions or resolutions, especially mid-season. We're never going to understand everything Benitez does. He does this for a living and he's privy to so much more information than we'll ever be. But the game is in trying to explain it, and my rationalizations – wrongheaded or not – are an attempt at some sort of sanity in the often overblown world of Liverpool/soccer/sports.

Because, at the end of the day, this is supposed to be fun. Even if this season's results have made that much less likely.

However, this back-and-forth has been a blast, and I appreciate both the opportunity and your willingness to direct this farce. Lord knows had I been responsible for starting conversations and providing paths for discussion, this would never have been finished.

I hope, at the least, it's provided some food for thought. But who am I kidding? At the least, I hope it got read.