Friendly Roundup, or Which Team Advertised Their New Kit the Best?

Share All sharing options for: Friendly Roundup, or Which Team Advertised Their New Kit the Best? 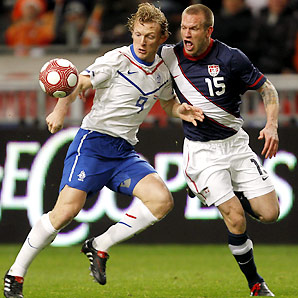 Thankfully, miraculously, inexplicably, all of Liverpool's internationals come through on the other side.

England: Steven Gerrard captained England to a 3-1 victory over an energetic Egypt side at Wembley. I was able to catch some of this match, and at times England looked overrun by the Egyptians, so it was little surprise that the visitors were able to notch one. But the second half was more positive for England, and former Liverpool man Peter Crouch continued his unbelievable scoring record for the national team. By all accounts, it was a fine display from Gerrard, who looked best when he was in attacking midfield later in the match, shifting up from a more withdrawn role he occupied earlier.

Spain: Pepe Reina continued to occupy a bench role for Spain and Fernando Torres came on as a second-half substitute in the 2-0 win over France (and managed to do this). I don't know what it's going to take for Reina to break through, but more clean sheets for Casillas, even in friendlies, can't help Liverpool's number one.

Argentina: Brace for it---Javier Mascherano played all 90 minutes in the 1-0 win against Germany. It was a big win for the Argentinean side in Munich, but I'd have rather seen Masch come off for a bit of a breather. Alas, Diego Maradona had his brain stapled at the same time as his stomach, folding over the pieces of the frontal lobe required for higher-order processing. He's all basal.

Greece: It has to be said that the Greek has seen better days. I mentioned yesterday in the comments section that within two minutes of watching I saw him clatter into an attacker and then do all but kiss him on the cheek, but soon after he fell apart. He got turned by Mamadou Niang on the first goal, and then he was responsible for giving up the free kick that led to N'daw's belter not long after. Seems like this was all intentional, just setting a trap for Wigan to fall into.

Netherlands: Dirk Kuyt broke the American piece of my heart, netting a penalty in the first half to send the Netherlands on their way to a 2-1 win over the U.S. It was a damned foolish penalty to concede by Jonathan Bornstein, who grabbed a shirtful of Wesley Sneijder and sent the Inter midfielder reeling. As is so often the case, Kuyt beat Tim Howard easily from the spot (allusion to Merseyside Derby victories, yeah!). Ryan Babel came on late in the match, but by that point I was about as interested as I am now.

Israel: Rounding out Liverpool's representation, Yossi Benayoun scored a fine goal in Israel's 2-0 defeat of Romania. It was a great finish from the midfielder, who found his way through a number of defenders and slotted coolly past the keeper.

As I mentioned yesterday, I'm pumped for the World Cup but approached these matches with a good amount of hesitation. But to see everyone come through healthy is an encouraging sign, as Liverpool will need anyone and everyone for this final push, starting Monday.