Hold Your Breath, it's Time for the Friendlies

Share All sharing options for: Hold Your Breath, it's Time for the Friendlies 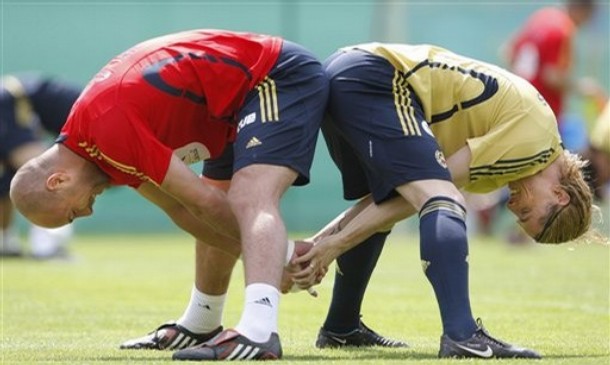 Not quite what I had in mind to avoid injury.

As somebody who is impatiently awaiting the World Cup, international competition should be a welcomed sight. As somebody who knows that if Liverpool incur any more injuries they'll be starting that guy from the adidas "12th Man" ads as the lone striker, I wish a global lightning storm would render the matches unplayable. But life experience tells me it's not likely.

So on come the friendlies, at an inopportune time for nearly every squad, but it's nail-biting stuff for Liverpool fans especially. This stretch of matches is crucial to Liverpool's hopes for the fourth spot, and they'll need everyone available. Particularly after the revelations about the injuries to Fabio Aurelio (three weeks out) and Daniel Agger against Blackburn, any more personnel losses would be tough to swallow.

England: Steven Gerrard will captain England in their friendly against Egypt this afternoon. Probably good for their squad to get together after what has been a slightly bumpy few weeks off the pitch. I'd imagine that he'll play on the left wing, a position that he seems to have flourished in under Capello. But England have Wayne Rooney, so it's not like it matters.

Spain: Fernando Torres and Pepe Reina have been named to the side that will face France, and the former recently spoke of his desire to play as much as possible. Terrific. I am a bit conflicted here, though, mostly because I'd love to see Pepe Reina get a shot at the number one spot on the national team. I haven't followed Iker Casillas at all, and he's clearly deserved the mantle of Spain's top keeper, but I think Reina could and should challenge for that spot come June. Maybe just not this week.

Argentina: Diego Maradona's side will face Germany today, and it will likely feature Javier Mascherano as the captain. Maxi Rodriguez misses out, which is not a huge surprise considering his playing time was irregular at Atletico before making the switch to Liverpool. He put in his best performance in a Reds shirt against Blackburn, though, and another week of training to build fitness could do him some good.

Greece: THE GREEK!!! Beware Senegal, he hasn't played in nearly a month, he cannot be injured, and he's likely been feasting on raw Senegalese lion's meat for the past week to prepare. Big money on him to power a header through the net today. On a more serious note, though, he'll need to be ready to come back into the fray on Monday against Wigan, as it's not looking like Daniel Agger will be fit and Martin Skrtel is a longish-term recovery.

Netherlands: Both Dirk Kuyt and Ryan Babel made the squad to face the US this afternoon, which is actually a match that I'm looking forward to watching. Granted, it's a friendly, but the US needs to be facing top sides prior to this summer /end patriotism. Kuyt has featured pretty regularly under Bert van Marwijk, who has sort of been a Dutch Rafa Benitez when it comes to Babel.

Israel: Yossi Benayoun, another of the recently fit Liverpool starters, faces Romania to round out the bunch. Besides the fact that Romania have turned themselves into Spain Jr., there's not a whole lot to say here. Benayoun will likely play a decent chunk of time, which he could use for match fitness, but he's probably part of the starting eleven against Wigan, so more than a half or so might be too much.

So that's who we have to bite our fingernails about today, and you can follow every match but Israel-Romania on ESPN360.com. I know it's a pain in the ass if you're not a subscriber to a certain cable provider, but if you're on a college campus or military base it's free. And there's always MyP2P.eu.

Back tomorrow with a round-up, in the meantime keep those fingers crossed.