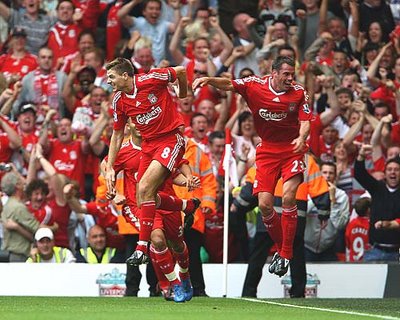 It could have been a tale of one half. At least statistically, the first half was one that was so dissonant with the Liverpool we've seen so often this season that I wasn't sure how to take it in. I'm still not sure that I can. Combine that with a passing display that has only peeked its head out on rare occasions, a passion filling Anfield that has been relatively absent far too often, and a scoreline that could have been 6-0, and you have, without a doubt, the best half of football Liverpool have played all season. You know things are going well when the low point of the half is a couple of missed chances from Fernando Torres and Daniel Agger. Pepe Reina was never tested, Agger was practically a third forward, and Steven Gerrard just dominated proceedings. Sunderland were, for all intents and purposes, an afterthought, at least until the second half.

And that's when you thought that it couldn't possibly continue---the Liverpool we've watched this season couldn't dominate a game like this for a full 90. To be fair, they didn't, largely due to aggressive substitutions by Steve Bruce early in the second half. But even then, Liverpool swiftly dismissed any fight Sunderland put up and asserted themselves as the only team that had a chance to win this game. As I mentioned, it's not a Liverpool we're accustomed to seeing this season---but it was joyously uncomfortable to see things come together in such a manner for Liverpool.

It was clear from the opening whistle how this one would unfold---Liverpool on the gas pedal, pressing Sunderland back into their own final third, winning an early free kick and forcing Craig Gordon into a good save from an Agger volley. And minutes later, Torres opened the scoring with his best effort of the season. Operating on the left flank, he did enough to create space between himself and Michael Turner, and with an onrushing Lorik Cana closing quickly, Torres flicked a curling effort that nestled into the far corner. It was a stunning goal even if it did take a deflection, which it didn't, and Liverpool got the early goal from Torres that damned them at Old Trafford.

But this was a different match and Liverpool were a different team. They never let up, they kept pressing, and they left little doubt that they were after another. They finally got it in the 32nd minute, when Glen Johnson found himself in space on the edge of the area and unleashed a left-footed bullet that took a nasty deflection off Turner and spun past Gordon. It was a well-deserved second, and had it not been for the wastefulness of the rest of the side, Liverpool could have had quite a few more headed into the half.

I mentioned earlier that the second half started a little differently---Bruce brought on Kenwyne Jones to give Sunderland three men up top, but even then they were unable to create anything more than quasi-threatening possession. And unfortunately for them, Liverpool swept back into control, creating chances for Torres and Babel, and eventually the former would get his second and settle the match.

Another fine move from Johnson freed up Torres just outside the six-yard box, and with the gentlest of first touches the Spaniard controlled, gathered himself, and placed one past onrushing defenders and Craig Gordon. It was great to see Torres collect himself in the manner he did today, particularly after he so uncharacteristically fluffed a couple of chances at Old Trafford.

Sunderland were able to maintain more possession after the third goal and created a couple of chances, but Reina was never that troubled. It was a roundly dominant performance from Liverpool, one that we've been waiting to see, and one that the club will need to repeat consistently over the next two months.

If there's one negative to come out of the match today, it's the fact that Liverpool were terribly wasteful. With the amount of possession they had (~65%) it was bound to be the case, but there were a number of chances that could (and should) have been converted. Everyone was susceptible because everyone had chances, but none were more guilty than Daniel Agger. We know he's got the power in his left boot, but it's his head that's so problematic. From set pieces he always seems to find himself with the space, but not once has he headed home this season. It's what could push him over the top, and it's what Liverpool have sorely missed with the departure of Sami Hyypia. In such a tight race for fourth, goals could be the difference, and more than three could have easily been a reality today.

To a man it was a determined, resolute performance. Pepe Reina really only had two chances to get dirty, first from a Kieran Richardson effort and then in the dying minutes from Bolo Zenden. The back line, supported by the dogged Javier Mascherano, gave Darren Bent and company little to work with, and had more than a few opportunities to get involved in attack. Glen Johnson is worth picking out here---he was a terror on the right side in attack and was an important part of some of Liverpool's best chances. And the "withdrawn" role for Steven Gerrard proved to be anything but, and the captain made his influence known throughout the match. There was little wrong with the performances of Maxi, Kuyt, and Babel in support of Fernando Torres, but it's hard to critique when the man up top makes things look so easy.

There were a few run-outs for the forgotten, but the match was settled by that point. Alberto Aquilani, David Ngog, and Nabil El Zhar all had some chances in attack but were unable to link anything together, and I fear that anonymity is slowly enveloping Liverpool's bench. That we didn't see Yossi Benayoun was not entirely surprising, although I wonder if he would have featured if the match were closer. With the midweek trip to Benfica looming, I'd be very surprised if he didn't have a role to play.

It's hard to argue with the way things unfolded today, as Liverpool were about as good as we could hope for. A few more goals would have been nice, and may prove pivotal, but considering the Reds had 29 shots on goal, there were bound to be a few errant efforts. It was the type of performance that we'll need to see much more of in the coming weeks, and despite how good it was there's still plenty of help needed. But you can't feel anything but optimism after today, and that'll do for now.