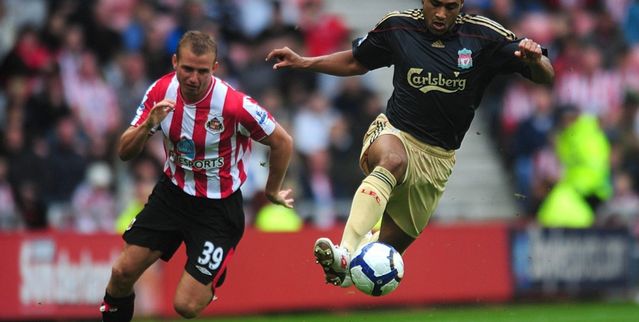 Team sheets are in, kick-off shortly.

This is a guess at a formation from the jumble of names that appeared on the official website. We know from their extensive explanation that the captain sinks deeper into midfield, but in front of him it's anyone's guess. Updated: Apparently it's more of a 4-4-2, or so says my stream. No Aquilani, which signals that he's either got the H1N1 or is not up to snuff form-wise. But at this point, he's not a name you put in your "squad predictor" game with much confidence. And similarly confusing is the continued absence of Yossi Benayoun; no explanation here about fitness or otherwise, so you have to assume he's just not a part of what Rafa's trying to do right now. Which is also anyone's guess. Let's just hope that he doesn't go the way of Albert Riera.

I expect to see a large amount of overlap from the three behind Torres---Kuyt naturally drifts into central areas, Babel has the pace to expose the defense on the wing even if he is played centrally, and Maxi has shown that he's another drifter. It could pose more problems than it does solutions---Maxi (or Babel, or Kuyt) will need to continue to provide cover for Emiliano Insua, and if the young Argetine gets too far forward with the left wing in the central part of the pitch, it's going to be a long afternoon.

Same problems here that I had with Liverpool, although the official Sunderland website does provide a bit more explanation---Kieran Richardson covers at left back, Anton Ferdinand will play in central defense, and Lorik Cana is back into the fray in midfield. Update: my stream says otherwise, so who knows. Which is unfortunate news for Liverpool---as I remember it, Cana was absolutely dynamite against the Reds back in October. And it's obvious that the danger in attack comes primarily from Darren Bent, but I'm sure Richardson will find a way forward, and Steed Malbranque always seems to force himself into the conversation.

Nothing like starting the day off with a Steve Bruce-related chuckle, and he obliges in this interview in the Independent. Probably the best part comes here:

"I have always loved going to Anfield, as a player and manager, even though they cane me with chants of 'Steve Bruce has got a big fat head'. Possibly my connections with United might have something to do with it. They used to call me 'Elephant Man' at Manchester City."

First---your connections with United probably help the fact that Liverpool fans don't like you, but the chants about you having a "big fat head" come from YOU HAVING A BIG F***ING HEAD. Take it from somebody who also has a thirty pounder on top of an unfortunate neck---just accept it and move on. And he seems like a decent enough manager, but statistically speaking, I have a hard time seeing what he's creating with Sunderland. Apparently Tim Rich at the Independent doesn't have any problems seeing it, but a career managerial winning percentage under 40% doesn't exactly blow my skirt up.

Mark it down and file it in the "potentially and most assuredly broken promises" file: Christian Purslow meets with top players to assure them that new investment is coming, and along with that there will be definitive forward movement in the transfer market. With more than a few players coming out (not that way) and stating that Liverpool are at least a few first-teamers away from challenging for a title, it's not surprising that this sort of thing takes place. But it's also dangerous ground for Purslow---this is a team, and fan base, whose trust in owners and suits is fragile at best. So basically, the message is: Don't f**k with my mind, Purslow.

And who knows if it's directly related to the Purslow meetings, or just a product of endless speculation, but Fernando Torres has finally refuted any talk of his departure. But good on him---he doesn't back off his earlier pronouncements that the club must commit some cash to the transfer market. It doesn't seem like a "do this or else" situation...yet. Those "earlier pronouncements" were about the club needing four of five new players, and while I'm not sure that's entirely realistic in one transfer window, a couple of new faces to challenge for starting roles would be a step in that direction.