Different Directions for Riera and Mascherano

Share All sharing options for: Different Directions for Riera and Mascherano 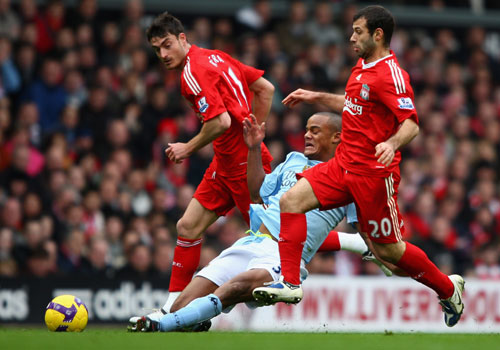 One headed for a life boat, the other with both feet on deck.

It looks like the news about Albert Riera leaving for CSKA Moscow was premature---the Champions League quarter-finalists have since denied their interest in the winger. But, as any married man knows, a woman with a goal will not be denied, and it's Russia or bust for Mr. Koroleva. Now the rumor is that he's headed to Spartak on a loan deal, something Liverpool had initially wanted to avoid. And it's not completely due to his wife's heritage, as the Russian League window is the only one open.

The events surrounding his departure make it easy to say goodbye, but I find myself continually wishing that things had gone differently for him, and for Liverpool, this season. After arriving prior to the start of last season, he worked his way into a regular role on the left wing, pushing past Ryan Babel and Yossi Benayoun to feature consistently in the starting eleven. He was one of the first true left-footed wingers under Rafa Benitez, and while he wasn't going to win many foot races, his skill on the ball and creativity were a welcomed addition.

Unfortunately this season, through injury and dips in form, he never made his presence known. His performance against Spurs at Anfield looked like it was a step in the right direction, but now it looks like a one-off, and he became a regular on the bench. And as Radio Marca found out, it was not something that he was too pleased with.

And as the headline reads, it's a completely different story for Javier Mascherano, who today underlined his commitment to Liverpool by stating that he's looking to spend his future with the club. It's a far cry from earlier in the season, when most of the talk about his future involved a move to Barcelona and displeasure with life in England.

But it's undoubtedly good news. When he's on top form, he's a major asset to the side. Granted, he's susceptible to a stupid foul here and there and could use some calming at times on the pitch. Both these things can be dealt with, though, and the latter almost makes him that much more ingratiating. Particularly in a squad that, at times, has the personality of drywall, Masch is a player whose effort and passion often set a great example. Unless it's at Old Trafford.

And I made note of it in a brief post yesterday, but if it wasn't for a John Carew goal, results for City and Villa went about as well as they could have. All things considered, the end of the season is setting up to be entirely soul-crushing.

As if it hasn't been already.