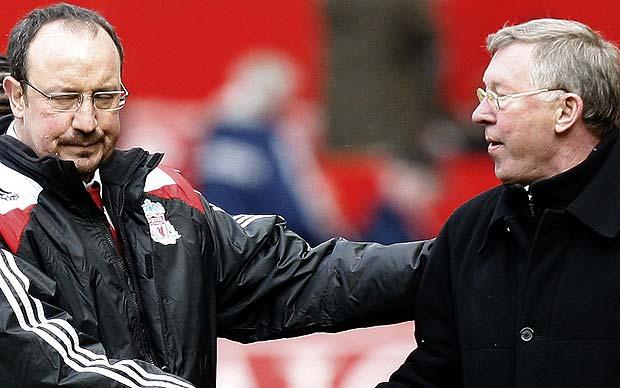 No surprises, and the only change is Maxi for Ryan Babel. It's the defensive set-up we're accustomed to seeing, the central midfield partnership that Rafa feels is best to break things up, and a front four that's got experience. Which, incidentally, might have been the tipping point for Maxi over Babel---not necessarily Liverpool experience, but in big matches. Plus that leaves Liverpool with four attacking options off the bench---Aquilani, Benayoun, Babel, and Ngog. Two of which have scored about United in the past.

And not too many surprises here, either. Rooney leads the charge, flanked by Antonio Valencia and Nani on the wings and Park Ji Sung in support. As I mentioned yesterday, it's going to be a hell of a task for the full-backs to keep Valencia and Nani under wraps. This makes the Lucas-Masch pairing a wise one, as part of their job will be to cover for Johnson and Insua should they get forward. Otherwise, THEY ARE WHO WE THOUGHT THEY WERE! Plus, no Judas, injured. Shock!

Big day for me as a sports fan---first Liverpool take on United, then my alma mater plays for a chance to go to the Sweet 16 in the NCAA tournament (note for mouth-breathing United fans: "alma mater" means the university I attended). Both heart and liver will be taxed in a nearly unstoppable fashion for around four to five hours, making a Liverpool result all the more important.

The rumblings about Fernando Torres' Liverpool stay are going to be around as long as the club is struggling, but Rafa has done what he can in the past couple of days to assuage any fears that the striker will be sold. It'd probably be better from the horse's mouth, and it'd also probably be better if Liverpool weren't in a position to have people question whether or not they'll need to offload star players to recover from suffocating amounts of debt. Just my thoughts, though.

And after a week of making love to Liverpool supporters' ears, Pepe Reina gets some love of his own from Rafa, who calls him the "best in England." No arguments here. I will say that all the headlines about Reina and Riera (news on him below) are making me think I have a mild form of dyslexia. It wouldn't be a complete shock to read completely opposite headlines about the same player in one day, but "Rafa's Riera tribute" just didn't seem like it was possible.

And a fellow countryman is also involved in exit rumors, although these are more of the persuasion that are founded on fact, as opposed to fear and rumor. I'm speaking, of course, about Albert Riera, he of the "loose lips sink ships" fame. Apparently the club have interest from CSKA Moscow and are looking to get rid of Riera as soon as possible. And considering that the Russian transfer window is the only one open, this would likely be it. I'm pretty nonplussed about this whole thing...sort of indicative of my feelings on Riera as a whole. Could have been decent, wasn't, acted like a prick, goodbye. Easy enough.

As far as United players go, Rio Ferdinand is none too happy about Liverpool's recent successes against United and is hoping that today's match marks the end. Honestly, can't he just be happy for Liverpool that they're successful in one area that involves this season? Some people's kids.

In men-that-look-like-rats-wearing-bras news, it seems that Gary Neville is quite important for United's treble hopes, at least so says Michael Carrick. I didn't even know that Neville was a part of the regular eleven, or that anyone actually believes this. "Having experience" and "having good experience" are two worlds apart, Michael.

And if your eyes weren't already rolling back in your head, here's the news that will surely do it: reduced sponsorship payments from Standard Chartered if Liverpool don't qualify for the Champions League. I've got to imagine that this doesn't count until they've actually got their names on the shirt, but it's still a simultaneous reminder that Liverpool are broke and struggling. Ahhhh, optimism.