Europa League Draw: It's Gonna be...

Share All sharing options for: Europa League Draw: It's Gonna be... 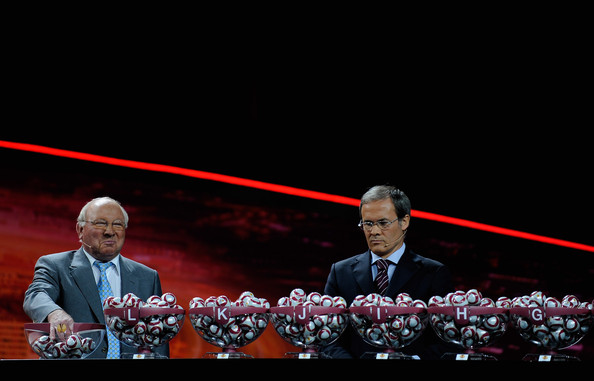 More news on the draw and the quarter-finals over at the Europa League Offside with Dan.

You have to say that this is shaping up to be a mighty interesting competition. Yesterday alone provided a boost for its stock---33 goals between the 8 matches, a spectacular Fulham fightback, a 4-4 draw between Valencia and Werder Bremen, a 4-3 win for Anderlecht that still wasn't enough, and of course, a Fernando Torres brace that saw Liverpool advance with a 3-0 win over Lille.

I mentioned yesterday that I was hoping to catch the second half of the match via torrent, but no such luck. And being at work all day today after binging on football and NCAA basketball yesterday means it's not likely I'll get a chance, particularly with more binging on the horizon starting around 12:20 EST. But from what I've read, it was a nervy yet positive performance, although one commenter from yesterday's post was not roundly impressed. I guess the takeaway, which I closed with, is that the club are at least starting to string together positive results regardless of what's going on around them. Hopefully it's not too late.

Getting back to the draw, it's a bit of a mixed bag for Liverpool. It's not the worst setup, but at this point I'm not convinced there are any "good" draws. The two Spanish sides will batter each other before taking on the Liverpool/Benfica winner in the semi-finals, and while this path to the final looks to be the toughest, it helps that Liverpool are at home for the second leg in the quarter- and, potentially, semi-finals.

Benfica are not a club that can be overlooked---they're top of the table in Portugal, setting the pace with 58 points and a goal differential that's silly (+48). They've got bundles of talent and plenty of danger men---Pablo Aimar, Oscar Cardozo, Javier Saviola are among the most prominent. In the Europa League they overcame a couple of early losses in the group stage to advance (trouncing Everton 7-0 agg. along the way), then drew with Hertha Berlin before overwhelming them in the second leg 4-0 to move through to the round of 16. And yesterday they contributed to the competition's string of nerve-wracking endings, snatching a 90th minute winner away to Marseille after falling behind 1-0 in the 70th minute. Slightly decent resumé.

But while it's a big challenge for Liverpool, it's also one that has a bit of harmony in it as well. The last time Liverpool stumbled in the Champions League, it was at the hands of Benfica in the first knockout round in 2005-2006. It's a chance for Liverpool to get some sort of revenge, although that rallying cry seems a little distant and a little hollow. More than anything, it's a chance for Liverpool to achieve something for this season's iteration. Past teams have done plenty for themselves---that 2005-2006 side had the FA Cup to console themselves. This year's side has little else in their control beside the Europa League, and we saw yesterday what they're capable of. Now it's just a matter of repeating that---no big deal, right?

Oh, and getting a result at Old Trafford Sunday.