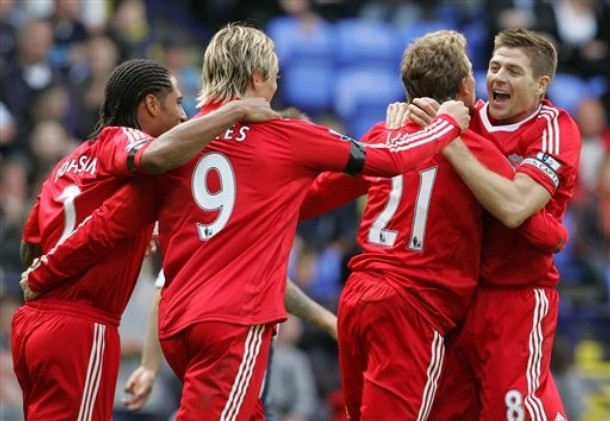 Liverpool win the second leg 3-0 to progress to the Europa League quarterfinals.

Like most avid Liverpool followers, I was driving through rural Wisconsin for the last 65 minutes of the match today.

Oh, was that just me? Fair enough. But through the beauty of text message---I was just reading, not actually texting, I'm no fool---I was able to follow the rest of the match. I nearly swerved off the highway when Torres got his first, ran a stop sign when he got his second, and curbed my car dashing inside trying to catch the last few seconds. No avail.

So for a complete game recap, I'll direct you to oh you beauty, as usual. And my thoughts are obviously abbreviated, limited to the point at which Lille started to flex a little influence and won some corners around the thirty minute mark. So this type of recap calls for bullets. Not Omar Little bullets, but the literary kind:

---All the pre-match rumblings about Albert Riera did nothing to take away from Liverpool's approach. If anything, I think we should be thanking him for acting like such an asshole. Liverpool have been missing that collective cutting edge this season---there's not been anything resembling steel or grit present this season. From the outset you got the "Fuck you, this is what we've got" vibe from Liverpool, and I don't think it's a stretch to say that some of that attitude is due to the hubbub about Riera. Who, incidentally, has been bound, quartered, and all but shipped off.

---The atmosphere at Anfield, from what I could tell through Romanian exclamations on my stream, was fantastic. When you say it was like a "true European night" you really mean that it was like a Champions League night. Which is fine, because those have been fantastic. But this was the Europa League, and it was still a stunning display from the supporters. There was nothing "minor league" about the way the match unfolded over the first thirty minutes or so. Of course, it all could have gone to shit after that, but from what I could tell, it was the Anfield of old. After some less than electric matches at Anfield this season, it's become a regular talking point---are Liverpool losing their supporters? Nights like tonight, where the emotional investment is clear for all supporters, in attendance and thousands of miles away (witness steven's compulsive hand-eating in the comments) are a good indicator that the answer is a clear no.

---Liverpool did just about as well as they could have out of the gates. We got the formation we expected, they took control of pace and possession from the outset, and they were rightfully rewarded. And Lucas finally started to show a bit of individuality early on, almost as though the play of Aquilani against Portsmouth clued him in that he didn't need to shadow Masch in central midfield. It was Lucas' brilliant forward run that led to Gerrard's opener from the spot, and later in the half he would again free himself in attack and get a decent shot on goal. We know he's got talent and skill, it's just a matter of finding out who he actually is as a player. To date he's mostly been a poor man's Masch/Xabi Alonso mutt, but tonight, at least from what I saw, he looked to be growing out of that.

Pithy, I know, and I apologize. I'm going to download the second half whenever I can and take a look, probably have some more thoughts tomorrow. It really is a great win for the squad, even if it's not in the European competition the club "should" be in. They were up against it, have a slightly important league match come Sunday, and have struggled to string together positive results all season. Maybe it's a return to the form we expected at the end of last season, or maybe it's a one-off. Either way, it feels pretty damn good at just about the perfect time.