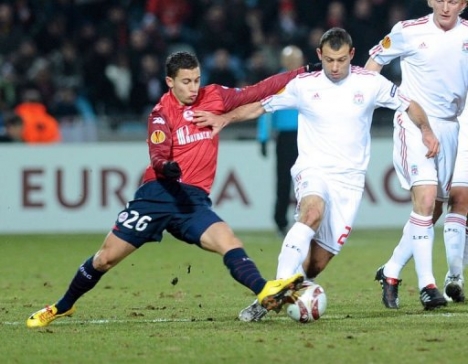 Game shown live on DirecTV for the bourgeoisie among us.

Nothing too terribly unexpected. This is probably close to the strongest eleven on current form, although the continued omission of Yossi Benayoun is slightly worrisome. Don't think it's fitness---at least I haven't read anything to indicate that he's less than 100%. Might be a product of very few, if any, appearances on the right wing, and with Babel emerging of late and Dirk Kuyt incapable of going more than one match without playing, Benayoun was never a likely choice.

Unfortunately no further clarification on the Albert Riera situation other than it catching like wildfire. Last night when I posted it, the Guardian link was the only one I could find, and earlier this morning it was everywhere, as you'd expect. Based on a lack of immediate response from club or player, it's looking more and more like Riera really did just lose his f***ing mind, and you've got to say that his timing is about as bad as it could get. Going into the second leg of the Europa League a goal down today, then traveling to Old Trafford on Sunday to face United. Sadly not even house music can make this situation better. Whoever's to blame, there's no arguing for the way Riera's handled it.

Bad headline of the day goes to the Scotsman---"Liverpool can Rein in Lille, insists Pepe" Come on guys. So don't read that article, read this one from Soccernet instead. Boring headline, same content, less pity for the guy responsible for copying, pasting, and writing asinine headlines.

And I've neglected some of the great news coming out about Pepe Reina and his future at the club...nothing is finalized, but apparently it's expected that he'll commit within the next month. Player of the year in a dismal season, and relatively unappreciated in seasons past despite being a perennial challenger for the Golden Gloves.

It wouldn't be pre-match press if someone didn't state the obvious, and lucky for us Steven Gerrard has obliged. I know I made a big deal when he introduced his elbow to Michael Brown's skull, and I still think he should have faced some sort of punishment, but if he's around he might as well start getting his shit together. Anyway, Glen Johnson has also mastered the obvious, and I couldn't help but get a morbid chuckle out of the statement "one week you might be great, the next you might not." Well, that's something to aspire to, at least.

And because I have to scour the internet for illicit copies of ESeason content now that mine expired, feel free to join me as I take in the highlights from the first leg, edited and captured by some hero who's mega-talented with rotating cube graphics:

Doesn't get any better for Albert Riera...well-loved and respected former Red Dietmar Hamann responds to Riera's outburst, generally owning him. Worth the entire read at the link above, my favorite part, though:

"He is clearly frustrated but you have to say since he signed for Liverpool (in September 2008) he has not done enough to really have an opinion on the manager."

Ouch. Not doing enough to deserve an opinion? Little bit of an indictment.

Early report from the Mail (so grain of salt needed), but apparently Riera is suspended for the next two matches and will incur a heavy fine. The article also notes that he'll be sold as soon as possible, and that the moon landing was a hoax. Who knows what to believe from the Mail?