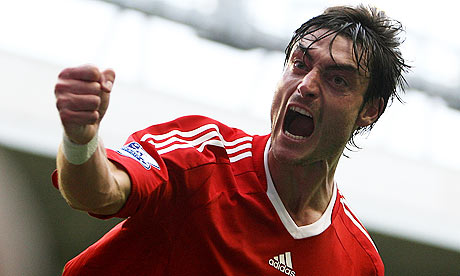 So it seems Albert Riera's absence isn't a product of failing fitness...via the Guardian and Sid Lowe:

"When the coach doesn't say anything to you and you are in good shape with no physical problems and training well, you have no choice but to think [the fact you are not playing] is personal. The team's playing badly and needs changes. If I'm doing something badly and you're my boss and you trust in me, then you would tell me what I am doing wrong and what I have to do to play. [The fact that Benítez has not said anything] is what most hurts.

"Right now the only market open is the Russian one. I have offers from two clubs and, given my situation, that has made me reflect a lot ... My objective is to go to the World Cup and for that to happen I have to play.

"He thinks he is in charge and he just turns a deaf ear to everyone else. The dialogue with the players is practically non-existent. There is a lack of tact.

"At Madrid they ask you to win and play lovely football. We are effective, sure, but we don't play brilliant football."

Oh, dear. So I guess that he won't be involved in tomorrow's match with Lille?

There's two ways this goes: one, it's a sham, he releases an official statement on the club's website, states his love for Liverpool, the fans, the club's history, blah blah. He would never say such things. Misquoted. The other possibility is that Albert and Rafa have a cage match at halftime tomorrow in the center circle. If Riera wins, he plays out the rest of the season. If Rafa wins, Albert becomes Rafa's personal facial hair manicurist and doesn't see another minute of pitch time.

I'm hoping for the latter. Not because it would prevent Riera from playing, but because...cage match.