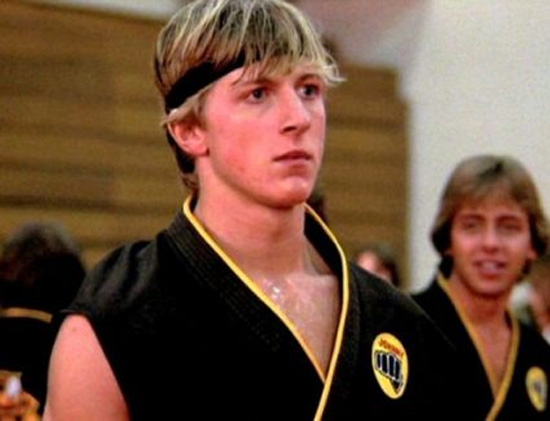 Looks like Johnny Lawrence grew up to be an FA board member.

One of the major talking points to come out of the match yesterday beside the Aquilani and Lucas debate was the forearm/elbow strike delivered on Michael Brown's noggin by Steven Gerrard. Not the most impressive move if we're talking about things like sportsmanship, leadership, and other types of ships, but an undeniably powerful and efficient delivery of force.

And so we learn today that Gerrard escapes punishment from the FA for the incident, but I fail to find any sort of justification for the decision. I'm certainly not on a witch hunt here, as any punishment would have likely kept him out of the visit to Old Trafford and the team is probably better with Gerrard in the side than out, but I can't help but feel like this is yet another indicator that all is not well in the world of Steven Gerrard.

Look, Michael Brown has a reputation for being a world-class c*nt. He's got a laundry list of offenses and specializes in the two-footed tackle. He's sort of built like Craig Bellamy---shifty demeanor, high shoulders, short neck, long head. By all accounts somebody you'd like to haul off and elbow.

The problem arises when you're captaining a flailing side who's just found their groove, you aren't exactly in the form of your life, and you've already shown that you've got just enough petulance to make your supporters question your role in the side. Gerrard has had a season to forget, and despite a few good shakes yesterday, the main reason we'll remember him is for the Ben Thatcher impression.

I've been banging the "Liverpool need more from Steven Gerrard" drum all season. It's unfortunate that he's been out through injury and struggled to find his form, because he obviously sets the tone for Liverpool. I don't think it's any surprise that the squad has struggled as a result, and a fully fit and on-form Steven Gerrard is one of the finest midfielders in the world. But the petulant, vindictive, whining Gerrard we've been privy to this season is a whole other animal, and I don't know that it's one that greatly benefits Liverpool.

Yesterday was undoubtedly one of the most positive results Liverpool could have achieved---three goals in six minutes, dominant in front of their home supporters, and building momentum at what seems like the perfect time. Steven Gerrard is an integral part of this squad, and if Liverpool are going to put up a true fight for the fourth spot his presence is damn near necessary. But not if it involves the type of thing we saw yesterday, or the diving and complaining we've witnessed far too often.

And I know there's the knee-jerk reaction of "WTF HE'Z STVN GERRARD YNWA HE'Z THA CAPTN," which is fair enough. He's been the captain forever, dragged Liverpool to innumerable victories in the country and on the continent, and is one of the finest players to don the shirt. But I can't help but feel that incidents like yesterday's do more damage than good for Liverpool, especially in this type of season. I'm hoping he gets back to form and fitness, physically and mentally, because Liverpool truly need him.

But enough of all this, the theater of sport has delivered us a peach today---Chelsea v. Inter.

Jack at the Chelsea Offside

MAD and Johonna at the Inter Offside