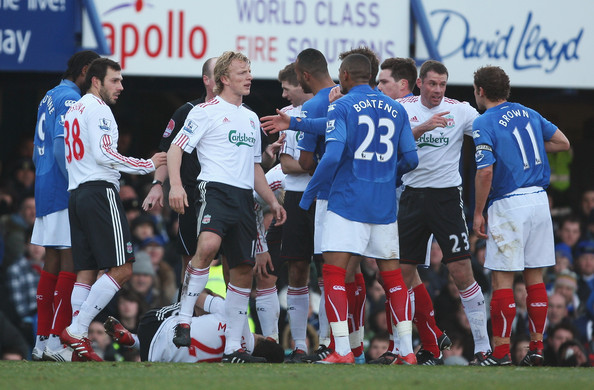 Lineups are in, and they solidify that Rafa has this site bookmarked.

Live on ESPN2(HD) in the United States

Okay, so maybe he doesn't read the site word-for-word, and just about everyone on earth was calling for Rafa to ring in the changes, but it's a massive step in a different direction. Both Lucas and Kuyt are on the bench, and we see Aquilani and Babel take their spots. The front five are about as strong as Liverpool can get in attack, and with Glen Johnson back for good, I can't see what else Liverpool can do. And all of this is ignoring Yossi Benayoun, who's also on the bench to start the match. I don't know that this formation solves all of Liverpool's problems, but it does address growing questions about whether or not Liverpool is capable of even looking for something different at this point.

Am I the only one whose internal voice reads names in the tone of Peter Brackley from Pro Evo? Whenever I read the name "Owusu-Abeyie" it's the worst. Or best.

Yanks Out! Unless it's Yanks with cash, then open the floodgates. Forget all that talk about Americans knowing jack shit and not being welcome at the club, if they've got the cash, open arms! Nationalities aside, the club need cash, and it's not exactly pouring in at the minute. There's got to be some point at which the ethnocentrism falls by the wayside for the betterment of the club. Fuck-ups are fuck-ups regardless of their country of origin, and it's clear that that's what Hicks and Gillett have been. Obviously it'll take some convincing if another American investor rides into town, but I look forward to the day that this doesn't qualify as news.

In other off the field news, there's apparently been some press linking Rafa to Real Madrid, a club that's had their own struggles this season. But those type of struggles involve having standards on the far side of the moon, and second in La Liga and out of the Champions League in the first knockout round does not meet those standards. Anyhow, Rafa has denied the rumors, pledging his allegiance to Liverpool. He always says the right things, doesn't he? Improving on the pitch and off, focusing one match at a time, etc. etc. The matter of words to action poses a different challenge, however.

Getting closer to on-pitch news, Rafa apparently ignored what Fernando Torres said the other day---"It’s too soon to talk, I honestly think that we’re going to be fourth, but for me Champions League qualification isn’t so important." It seems that Rafa went to the Daily Mail school of interpreting player quotes, and has admitted that Champions League qualification is the most important thing for Torres. Or something.

And finally, here we are, somebody who plays doing some talking, even if it's irregular due to injury. Not irregular talking, irregular playing time. Daniel Agger calls for more accountability from all involved, particularly those who are most responsible for the on-the-pitch action. As I mentioned, Agger has been playing only sporadically due to injury, but he's somebody who's entirely capable of becoming a defining presence for Liverpool's future.

Lastly, today marks Liverpool's 118th birthday, founded by John Houlding on this date in 1892. Not the most ceremonious of seasons to celebrate Liverpool F.C., but the club's history on the whole is remarkable.