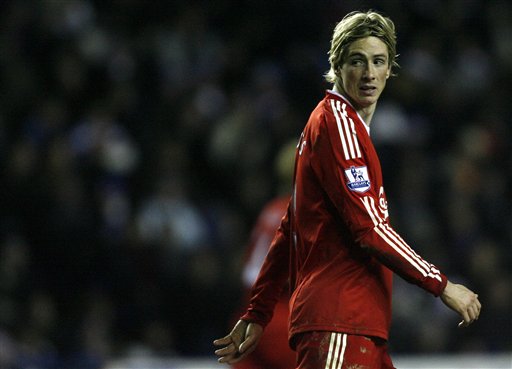 And a cleverly selected picture of him metaphorically walking away.

Big news of the day, obviously, is that Fernando Torres gave an interview to AS and implied that he could be leaving Anfield in the summer if Liverpool don't spend big on some new personnel. A sampling of the headlines:

MirrorFootball: I could quit Liverpool unless we bring in five top-class players

Not very encouraging. So let's take a look at the quotes, here from the Soccernet account:

"It's too soon to talk, I honestly think that we're going to be fourth, but for me Champions League qualification isn't so important. The really important thing is that the club makes a big effort and brings in important players, who will improve the quality of the squad. We need four or five top-class players to compete, better than we have here, who will make us grit our teeth and do everything we can to try and keep our places.

"Without reinforcements next year we will once again be fighting to be fourth. I want to fight next year to win the Premier League, to win the Champions League or the Europa League, but for this there have to be signings. There are so many circumstances and so many things that you have to take into account that it is too soon to talk about that. But I have this and three more years of my contract.

"I've left my home and it's clear that I owe Liverpool many things, and I'm very happy here. The fans have treated my like one of their own, but I'm going to think about my future and hopefully it will be here. I think these fans deserve to win. Beyond thinking about me, I think the club deserve to get back to winning (trophies), but they know themselves that right now that it's far off.

"The fans are worried about players going, it's a problem when you start to fear that your players are going because you know it's because the club is not moving forward, but I don't think that is going to be the situation here. Since the arrival of (managing director) Christian Purslow Liverpool have had an important boost, we signed with a big-money sponsor to match Real Madrid, then things are going to go forward."

Take away the headlines that ignore the statement about "having this and three more years on (his) contract," and the potential that he might not have even said these things, and you've still got very valid, very worrying points.

I disagree that you need world-class players to make others compete---regardless of skill, professionally paid players should be putting forth a respectable effort match after match. But I can see how that would eventually influence the collective psyche of the side. Without players of another, higher caliber, Liverpool are going to continue to fall by the wayside and lose to teams like Wigan and Monday's opponent, Portsmouth.

The most worrying part of all this is the possibility that yet again, Liverpool will be unable to finance moves for the type of talent that Torres is talking about. And unfortunately, the bulk of this responsibility falls to the feet of owners who have time and again proven themselves roundly incompetent and oblivious.

I don't think we're quite at the point of the headlines---yet. And as Torres says, I'm not convinced that sliding further and further down the table is grounds for a mass exodus. But that type of finish, combined with another disappointing summer transfer market and a slow start to the 2010/2011 campaign, the last three words of the above headline could be all we read.