Share All sharing options for: Lille 1, Liverpool 0: Better than Awful, Worse than Decent 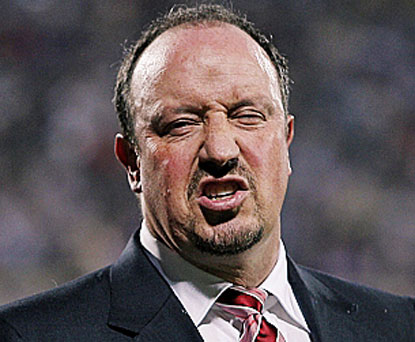 And that's not exactly flattering.

Good indicator of lowered standards: I was jubilant to see Ryan Babel. Absolutely ecstatic. Even better, Lille stretched Liverpool in the first half, and it brought about an attack. An actual attack! From Liverpool! Be still, my fluttering heart! And three serious efforts on goal! Steven Gerrard from thirty yards after a nifty backheel, then from a free kick, and then a Fernando Torres arrowed header that was saved well! I need to lay down.

I make fun of myself, but I actually was somewhat encouraged by the way Liverpool came out today, even if it was forced mostly by Lille and only looked halfway decent because they were so shitty the other night against Wigan. But before I get to the match itself, of which I only caught one half, a word on the squad selection:

Onto the match, then. As I mentioned, it was Lille who came out on the front foot, and the hosts had a decent chance on goal within the first minute and rarely relented. A number of dangerous runs from Eden Hazard, the clear man of the match, were barely survived, and it looked like it would be a more classic version of Liverpool in Europe. And hell, even with the most conservative squad selection possible that didn't include Cavalieri on the other side of the goal mouth, Liverpool were able to create some fine chances.

The most notable came in the hyperbole earlier---Gerrard created something out of nothing and turned back the clock from nearly thirty yards, Torres and Babel linked up wonderfully on a few instances, with the latter all alone earlier in the half on goal, and were it not for Mickael Landreau, Liverpool might have had the vital away goal. First the Lille keeper saved Gerrard's low curling free kick, and from the resulting play he brilliantly turned away a point-blank Torres header. Any other season, Liverpool convert at least one of those chances. This season, it would have been shocking.

And from what I read from more reputable sources, the second half was not quite the same, and the aforementioned Hazard netted from what was apparently a fluke-ish (?) free kick. 1-0 is not the end of the world here---Liverpool could have done much worse on away from home, and we've certainly seen worse this season. Being at Anfield for the second leg is an advantage in theory, and going down one in the first leg puts the onus on Liverpool to find a goal.

Which brings me to my earlier, conveniently bolded point about the side that lined up today. Yeah, yeah, what do you expect, it's Rafa on the road in Europe, even the fit players aren't fully fit, blah blah blah. It's abysmal to see the same flaccid attack match after match, and there's nothing being done about it. And I hate to continually make him the whipping boy, but at this point there is no place in this side for Lucas. He stifles his own side far more than he benefits it, but time and again he finds himself on the pitch for 90 minutes. But he's not the only offender, and it's honestly not his fault that he continually gets selected. Nobody's at fault because everybody's at fault. There's no invention even before the opening whistle---and that happens at Lille, at Wigan, at Anfield, probably at Melwood.

So brace yourselves for a huge proposition: that Liverpool knock off the flaccidity in attack and actually try something new. Here's what this virile blogger proposes:

Why? Because 14 goals in 14 games, 5 coming from matches against Unirea and Blackburn, that's why. Because there's no semblance of anything resembling inspiration or creativity in this side, that's why. Because at this point Liverpool are eleven men in business suits doing anything but playing football, that's why. And because, quite honestly, out of all competitions but the Europa League, barely hanging on to sixth in league, there's no reason not to.