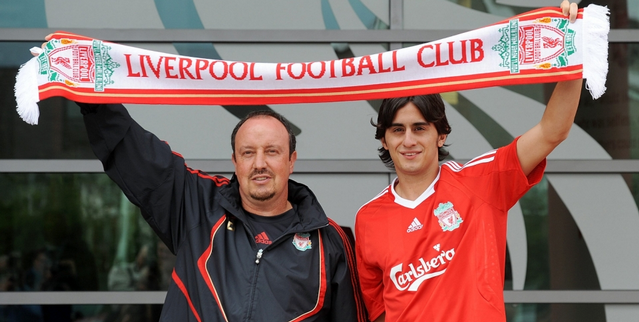 In part four nate and I look at transfers under Rafa's reign at Liverpool.

Ed: So after a relatively active January transfer window, and players traveling both ways, we have a more up-to-date picture of Rafa's transfer dealings with the club. You can't really have this type of discussion without mentioning finances, but I'd love to try, mostly because I'm not patient/intelligent enough to dig very deep into it. But it's also a slippery slope---you start with the "what if's" pertaining to financing for the transfer market, and next thing you know Liverpool have a four man midfield with everyone making £150,000 per week.

Plus, I don't really think he's done that poorly. In the past I've written some harsh things about Rafa in the transfer market, but on the whole it's not a complete disaster. High praise, I know, but there's been times when my frustration with things on the whole have bled into other areas, and it seems like the transfer dealings, for whatever reason, are an easy enough target. But given the funding he's had (first funding reference!), he's brought in a level of talent that's arguably comparable with the other big clubs.

So after looking for a source that had a list of the signings that wasn't nearly five screens long, I'm just highlighting some of the "bigger" signings since Benitez came to Liverpool. Granted, not entirely comprehensive, and missing some vital information about the funding (number two!), but still a decent list of who's come in:

Obviously some highs, some lows, and plenty in between.

Couple of questions---what do you make of the transfer business since Rafa's been with the club? And is it even possible to evaluate all of this given the backroom turmoil?

The axiom ‘Benitez has mostly succeeded with the bigger purchases, had decent success with mid-range buys, and has been hit-and-miss with free transfers and low-cost deals’ basically works. A breakdown of transfers you listed, but only counting players with at least one first XI start (no Pacheco, Nemeth, San Jose or Dalla Valle):

That’s seven “big” purchases, 15 “mid-range,” and 20 “low-cost” or free transfers. Five big and eight mid-range players are still with the club, while only seven of the low cost are (four of whom were signed within the last two seasons). The percentages are 71%, 53% and 35% respectively, and that’s probably an above-average record.

I’m fairly sure both Chelsea and United have purchased more than seven £10m+ players since summer 2004. Even if you buy the argument that Liverpool’s spent more than United recently (as Ferguson drunkenly claimed last season), Liverpool doesn’t have anywhere near the means to spend a combined £17m on the off-chance Tosic and Ljajic might one day become Premiership players, just as one example.

There’s no two ways about it – Liverpool are the poor relations in the “big four,” and it’s finally come to bear this season. The team needed a much greater overhaul when Rafa arrived than United or Arsenal thanks to their respective successes. Chelsea got their needed overhaul thanks to Roman’s millions, and have spent comparatively less in the last couple of seasons, although they can still pay £18m on the likes of Zhirkov (who’s started less games than Aquilani). It’s no surprise fourth place is under threat from the nouveau riche Manchester City and relatively free-spending Tottenham.

Two things have impressed me in Benitez’s dealings: a ruthlessness that Houllier desperately lacked if players aren’t working out and making money on players sold. You rarely saw a player leave after six months or a year under Houllier, but Benitez is never afraid to cut ties. And more often than not, Liverpool makes money when he sells players. Alonso, Crouch, Bellamy, Sissoko, Carson, Arbeloa, and Voronin – among others – all brought a profit.

Admittedly, Keane stands out like a sore thumb: the only out-and-out failure as big purchases go (Babel’s still here…). I still don’t know why Benitez bought him without a deal also in place for Barry. But even then, Liverpool only lost £3m or so. Spurs bought Keane back for £16m only to loan him to Celtic – for free – exactly a year later.

I wish Liverpool had more money, and I blame the fact Benitez doesn’t on the debt laden on the club by two lying owners who happen to share my nationality. Purse strings have clearly tightened since 2008, although the worldwide recession and subsequent inability to build the new stadium obviously factors into that.

But at least 15 clubs operate under similar financial restraints, and most have fewer resources than Liverpool. Of course, it’s little coincidence that coincides with Liverpool’s current league position.

E: Dividing the transfers up in that way (big, mid-range, low-cost) is something that makes a world of sense, but for whatever reason I wouldn't have ended up there in ten thousand words on my own. Either I haven't read it or you haven't shared it, but thinking about what Liverpool have bought in the transfer market, nothing could be closer to the truth. The only hiccup, as you mention, is Robbie Keane, and given recent events, his failure at Liverpool might not have had anything to do with Rafa.

Looking at the "mid-range" buys, I think you can make the argument that this is now "Liverpool quality," like it or not. Reina, Kuyt, Riera, Lucas, Agger, and Skrtel are all regular first-teamers, and rightly so, and of the mid-range buys that have departed, Garcia, Crouch, Sissoko, and Bellamy figured on a consistent basis during their time at the club, and made significant impacts in their own right. The only real gems in the "low-cost" bracket, at least proven, are Arbeloa and Aurelio, with Ngog, Kyrgiakos, and Degen recently coming good.

And the idea of Rafa's ruthlessness rings true. We discussed his tendency to stick with his plan tactically in a previous section, and the same works here. It was never clearer than with Keane---came in for big money, didn't perform, sold him 6 months after arriving. That takes cantaloupes. He's done it with players of every stripe---Peter Crouch, Craig Bellamy, Xabi Alonso, Jermaine Pennant. Granted, some have asked to leave, but I think Rafa could have had some flex if he wanted them to stay. You get the feeling that sentimentality doesn't have much bearing for Rafa in the transfer market, and it likely shouldn't.

I know in my initial piece I pleaded for the chance to avoid the "what-if" scenarios, but now I'm compelled to move in that direction. I know you can't go by rumors, because God knows there's been literally thousands of players linked with the club since Rafa arrived. But it is interesting to think about where and how Benitez could have done better given the circumstances.

Has he settled with the buys he's made? Even with those who have gone on to have success at the club, could he have done better? The simple answer is yes, every bought player would ideally succeed. But I think it's a much more interesting question to think about the constraints he's operated under, and how it affected the players he "chose" to purchase.

n: The “what if” game will drive us crazy. We’ll never know for certain, but I’d hazard a guess you could make one hell of an XI from players who got away.

And nearly every "what if" player can’t be blamed on Benitez. Dani Alves? Made it as far as an airport runway before Sevilla hiked the price by £2m, £2m that Liverpool were unable to pay or Rick Parry dithered on. And we got a £6.7m Jermaine Pennant instead. Villa or Silva? Nope, the owners are out of money. Wouldn’t pay the extra money Villa were demanding for Barry either.

And those are just three, three recent ones no less. Who knows how many more we never heard about or which went further than idle media speculation? Frankly, it’s best not thinking about it.

But Benitez didn’t “settle” for many of the mid-range buys you list as “Liverpool quality.” Kuyt, Lucas, Agger, Skrtel, Reina, Garcia, etc. were identified and – avoiding the usual debates over the first two named – have done well at the club.

The constraints Liverpool operate under – first under Moores and Parry, now under Statler and Waldorf – rule the day. As much as we’d like better players, Liverpool simply can't afford it. And given the needs from 2004 up until last year at best, Benitez had to buy quantity over quality to replace the deadwood in the squad and nonexistent Academy. And until that changes, we’ll continue to rue missed opportunities and debate "Liverpool quality.”