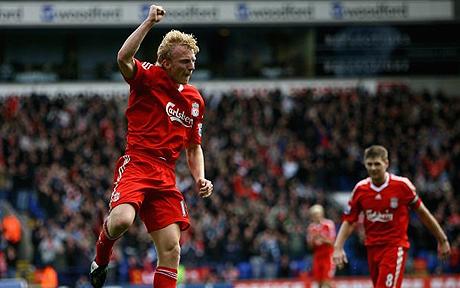 Dirk Kuyt's 55th minute header proves to be the difference as Liverpool sweep the Merseyside Derby for the year, defeating Everton 1-0 at Anfield.

On principle I'm against self-referencing, especially in the face of the obvious. So I won't do that, but I will note that some handsome bastard that posted a match preview yesterday stated,

"...it’s more likely that Liverpool and Everton will assault each other with a football pitch and 40,000 fans as the backdrop."

What a brilliant son of a bitch, because this one was violent. And not violent in a players just clattering into each type way (which happened in the first minute---Carra on Pienaar), it was more like boots being used as devices for an assault. Two red cards, albeit one in the dying minutes, and likely at least two more deserved. Everyone predicted an ugly match, but everyone knew it was the result that mattered, and the result is what Liverpool got.

A match recap is almost pointless, as the match was not at all notable for its football. It was literally a case of football being played in between usually violent fouls. The usual suspects were involved---Mascherano, Fellaini, Pienaar, Kyrgiakos. I think the Greek was unlucky to be sent off, particularly in light of the challenges we had seen up to the point he received the red card. Fellaini should have been sent off as well, and he was lucky not to get a yellow when he kicked the ball of Dirk Kuyt's face. And Steven Pienaar should have seen red for the studs-high challenge on Masch, quite rightly called a "potential leg breaking challenge" by Craig Burley. But Masch was no saint either, and he was fortunate not to receive a booking of his own for clipping Fellaini early in the half.

So there's your first half in a nutshell, with really only one chance worth discussing for Liverpool. Too bad it came about as a result of a dive by Steven Gerrard, and the football gods punished it tantalizingly, seeing his resulting free kick clatter off the crossbar. It was almost the mirror image of Landon Donovan's flop earlier in the half at the other end, which saw Pepe Reina parry away a Leighton Baines curling effort. Outside of that, after the Kyrgiakos sending-off I was dying for the halftime whistle to come; Liverpool were clearly a bit scattered after the Greek was sent off and were in desperate need of some organization.

The second half started a bit tighter, and Everton came out looking decent in attack, linking together some good play on the edge of the area. A bit back and forth for a few minutes, but after another corner conceded by Johnny Heitinga, Liverpool would have their eventual winner.

Corners have not been a great source of goals for Liverpool this season, and to the point that Kuyt headed in the winner the Reds had taken their fair share without any real threat. But some shaky marking and tentative play from Tim Howard left Kuyt with the easiest of chances---it was a fantastic inswinger from Gerrard, leaving Kuyt with little to do. And as we have seen so often from the irrepressible Dutchman, there's no mistaking his finishing from only yards away. For a side that has had trouble scoring goals with 11 men, to see Liverpool take a lead with only 10, in a derby, against the odds, was magical.

And of course you expect the next 40 minutes to be nervy, and they were in their own right, but there were never any real chances for Everton. Save for a Victor Anichebe skinning of Insua, which forced Reina to swat away, and another Anichebe effort from the edge of the box that Reina saved well, Liverpool were almost comfortable scrapping to save the lead. It was down to more resolute defending from Liverpool, particularly Carra and Agger in the center. Mascherano did admirably at right back, although his energy for the challenge left the flank exposed more than a couple times. No faulting the Argentine, who turned in another solid performance regardless of his role. The weak link was clearly Insua, though, and he was beaten badly on more than one occasion. I think now's the time to give him a rest.

Outside of the backline, it was mostly a collective of anonymous yet serviceable performances. Maxi was mostly missing but provided a few decent balls forward, Kuyt put in another shift of maximum effort (and obviously notched the winner), Gerrard tried to stretch play when possible but was mostly frustrated, and Lucas was solid as the lone man in defensive midfield. Ngog, however, struggled to have an impact, often looking isolated up top and unable to make an impact, he was taken off for Ryan Babel in the 64th minute.

The ugliness of the match takes nothing away from the result, which sees Liverpool temporarily catapult themselves into the fourth spot. It was another clean sheet, this time with a different back line, and any time 10 men earn the three points after a sending-off you have to be impressed. After the Wolves match I ranted a bit about Liverpool needing to define themselves, to put in a shift that had character, to convince us (and themselves) that they were a side capable of consistently playing football in a manner that gave them an identity. Today was as good an example as any that they're certainly capable, and it's coming at just the right time.

After the visually assaulting nature of the football today, give your eyes a rest and let your heart take over, proud of the fact that Liverpool did exactly what we've been dying for them to do.