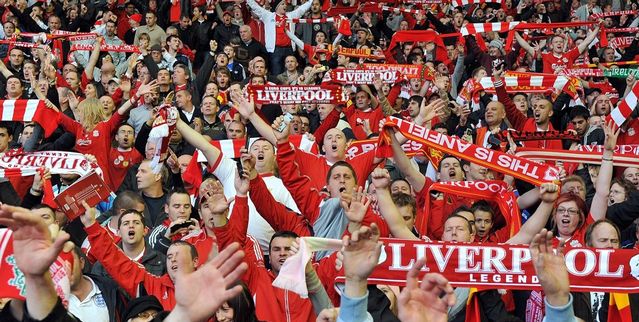 The 213th Merseyside derby from Anfield. Get your back up.

Live coverage on ESPN2(HD) from 730 EST in the States. Gut check, West Coasters.

Honestly, a little surprising. Maxi Rodriguez is probably the biggest surprise---I'd figured that Riera would always be preferred over the new signing, but apparently Rafa knows something I don't. And Daniel Agger makes his way back after being cleared earlier in the week to partner with the Greek. Honestly, I love Daniel Agger, but I'm a little leery of breaking up the Skrtel/Greek partnership right now. I still think Agger could do fine at left back---long, loping strides, no worries letting one fly from 35 yards, the only real question is his ability to put the ball in the box with precision. Obviously no Aquilani, with Lucas and Masch partnering in central midfield. But no worries, he's ready to shine! Maybe that just means interpersonally, not necessarily at football. Cause, you know, he'd have to play.

If you're to believe ESPN, Fellaini will be on the right wing. His counterpart for Liverpool? Masch. Thus leading me to believe that the person responsible for the starting eleven graphics is either a huge jokester or incapable of recognizing a formation besides the 4-4-2. The pace is there for Everton, albeit led by an attacker without loads of pace.

It's a must-win. Didn't we establish this months ago? I'm numb to must-wins. I laugh in their face. My blood pressure does not however, so this does me no good.

We'll find out in a short time, but apparently it's been quite the selection dilemma for Rafa Benitez. More to the point, he doesn't know whether or not to start Alberto Aquilani, although the Italian "can play if necessary." It is...I think? What a strange, strange quote. He can play if necessary. What does that even mean? Is this a statement of fitness? Is he injured again? Being sold? Full points to you again, Rafa, I'm mindf***ed.

Speaking of mindf***s, David Moyes has zeroed his beady little eyes in on Liverpool's pocketbook, proclaiming that Liverpool are finally crashing back to earth after "a decade of overspending." It's hard to argue with the point that Liverpool's current spot in league is somewhat reflective of their budgetary struggles. But I wouldn't go so far as to say the clubs are in the same classification now---there's still a bit of a talent gap between the sides, and I think in terms of reputation there's still obviously a massive gulf. Which means precisely d*ck today, but still, I have nerves to soothe.

Johnny Heitinga bucks the concept of original thought and backs Moyes, saying he expected better from Liverpool this season and will not rest until he hears the lamentations of Maxi Rodriguez's women and sees the Argentinean winger driven before him. Look, I'm paraphrasing, if you wanted the real thing you would have clicked the link. And I agree that it's better to play this version of Liverpool, because if Everton tried to play the 2005 Champions League winners, they would have found a way to bend the space-time continuum, and would probably never lose again. Or they'd have to travel faster than the speed of light, at which point all matter is converted to zero, and they'd be vaporized. Science!

Robbie Fowler Watch: I'd like to start to make this a regular sort of thing, because the legend grows, and not just in the midsection. He's moved on from taunting Bitters with line-sniffing celebrations to taking on all comers down in North Queensland. This after refusing to take his place on the bench after a bust-up with the Fury's manager. I'm not entirely sure Australia is well-suited for this type of genius. Or insanity. Actually, funny story about penal transportation...mind out of the gutter, perv, I'm talking colonization. Watch The Proposition or read a book or something.