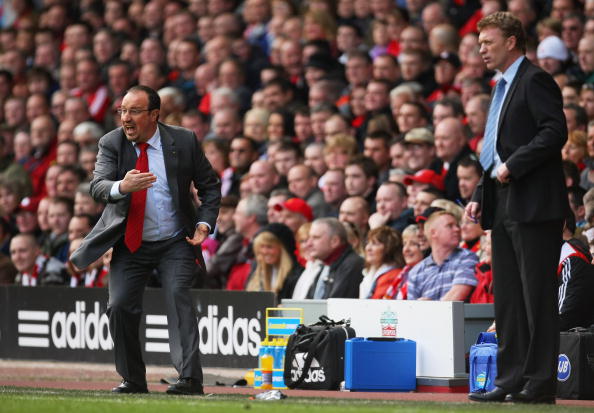 The derby to end all derbies. Or, at least, the last derby this season.

And it's gonna be ugly. Maybe not Liverpool-Hull ugly, but assuredly ugly. Both sides have underlined the importance of the result regardless of the performance, and for two sides that are desperate for three points, aesthetics have no place. And as is so often the case in the Merseyside derby, there's no need for them. The passion, grit, and general resentment between the sides usually takes the place of any desire to play football; it's more likely that Liverpool and Everton will assault each other with a football pitch and 40,000 fans as the backdrop.

I mentioned at the beginning of the week that this Everton side are a long way from the season opener, in which Arsenal strolled into Goodison and notched six. I'd love to see them play similarly tomorrow, but the fact of the matter is that David Moyes has his side in a solid run of form, as he so often does around this time of year. And as I mentioned, there's ample reason the cliche "form doesn't apply in matches like this" fits. Granted, Liverpool have only lost twice (FA Cup included) since the 2005-2006 season, but Everton pose just as big a threat as United, Arsenal, or Chelsea, if not more.

This derby has a decidedly different flavor than in years past, and even than November's 2-0 Liverpool win at Goodison. Tomorrow we'll see a Liverpool side that is desperate---not just for Merseyside bragging rights, but for upward mobility. They were struggling in November, but at that time there was plenty of season left, the injury concerns hadn't completely decimated the side, and they were facing an Everton team that had not yet found their stride. Fast forward to today, with Everton nipping at Birmingham's heels and poised to make a run at a European qualifying position.

And it's also Liverpool nipping at someone's heels, trying to make a run at a European qualifying position. Of course for Liverpool the only acceptable position is the Champions League, but the two sides are both trying to convince themselves that they've stabilized themselves. Both are in good(ish) form at the moment, both have some history on their side. For Everton it's forcing two draws at Anfield last season and nine league games without a loss, including a match at the Emirates they very well should have won. For Liverpool it's ten years without a loss to Everton at Anfield and a return to form and fitness for many of the key men, including the resurgence of Steven Gerrard and Javier Mascherano (at least against Bolton).

There's plenty of pace, power, and grit in this Everton side---the pace comes from the wings and up top: Pienaar, Osman, and Donovan (see thoughts here); the power from a strong backline (albeit weakened by the loss of Jagielka for the season) and midfield; the grit personified by the mosquito-esque Tim Cahill and captain Phil Neville. It's impossible to admire anything about Everton, but were it a possibility, I'd feel safe in saying that their ability to maximize their collective talent through determination is nothing short of impressive, and a fine reflection on David Moyes. But for the record, they're a bunch of twats.

Liverpool has slowly but surely seen the physio's room empty, with returns for extended rehabbers Daniel Agger, Martin Kelly, Nabil El Zhar, and Fabio Aurelio. This on top of the return of Albert Riera and Steven Gerrard, and you start to get the impression that Rafa is finding his bearings in the squad selection. Obviously Yossi Benayoun, Glen Johnson, and Fernando Torres are still out, but it's less and less about fitness and increasingly about this side defining themselves in a way that, I shudder in saying, resembles a bit of Everton. Gasp.

As for who we'll see, I can't imagine there will be a ton of changes despite the returns I mentioned above. The back line has been far too stable to displace Kyrgiakos and Skrtel (3 clean sheets in a row) in the center, and even with Martin Kelly available for selection, Carra's going to be the man. Aurelio may cause a question for Rafa, but Insua's the more likely to feature given the somewhat recent clearance for Aurelio.

And while I hope we'll see Aquilani tomorrow, I worry that Rafa will prefer Lucas and Masch for a match that will see the sides literally and metaphorically kick the shit out of each other. Aquilani's not made of glass (fingers crossed), but it's his first derby and Rafa's shown a penchant for leaving him out of matches he expects to be physical. Inevitably we'll see Gerrard leading the charge, ideally flanked by Maxi and Riera with Kuyt up top. But David Ngog gave a good account of himself last time out against Everton, and the derby might not be the best proving ground for the January import, in which case we'll again see Kuyt wide right.

You've seen the links, you know the history, you know the importance. All that's left is the football, and that's all we can ask for. Liverpool v. Everton at Anfield in the 213th Merseyside derby.