Share All sharing options for: Dreaming Up Derby Nightmares 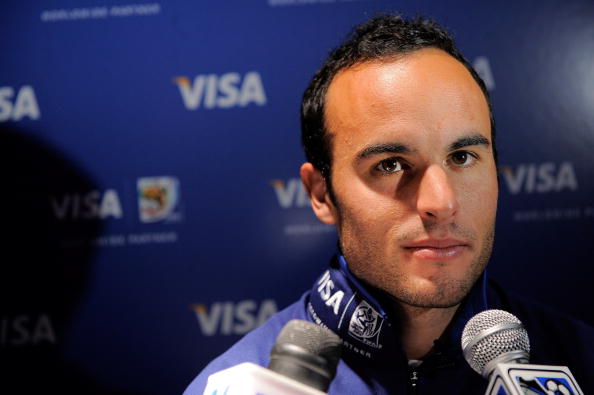 And protesting the official site's insistence on calling the Greek Soto.

I'll get to real news eventually, but a little back-story first: One of my good buddies is a big Liverpool fan, we both got into the club around the same time, text each other incessantly about news, blah blah blah. He's had a seething hatred for Landon Donovan for years---ever since Donovan gave an interview awhile back and said something to the effect of "soccer is more popular than baseball in America." Clearly false, but not necessarily Bruce Banner type stuff. But combine the fact that said buddy was playing minor league baseball with the fact that they share a last name, and you have a hatred with the heat of a thousand suns. Obviously this is high comedy for me.

Yesterday, then, we were texting about the derby on Saturday, and I mostly brought up his Landon Donovan hate in passing, but it quickly spiraled into the depths of the human psyche:

D: That, in all honesty, would be rock bottom for me. If he hits a winner or equalizer on Saturday, then just start driving west, look in the ditches for my body.

Ed: The gravity of that potential situation just hit me, what a perfect storm of disappointment and hatred.

D: I don't even want to think about it, between that fear and the sodium in a Bloody Mary that morning, my blood pressure could be debilitating.

Ed: It's the stuff of nightmares---the namesake that has embarrassed you all these years, playing against your favorite team's most hated rival, in a match with huge implications.

D: I don't think you understand how much I need you to not build this up into something that could potentially ruin me forever.

Ed: Add to this the potential for a surge of instinctual patriotism if he does score, going against everything you have convinced yourself to hate so much, it's devastating.

D: I'm already defeated. I will try to explain to my liver that tonight is your fault, but will be too drunk to aptly explain.

Ed: It will never come to fruition, the Greek will make an example of him in a way that only the Greek can---ruthlessly and comprehensively.

D: You f**ing bet he will. That five-headed clown (see banner pic) will be sacrificed for Poseidon just outside the box.

Ed: Desperate and vengeful, your response is visceral perfection.

D: Just your mention of the Greek gives me hope.

D: If he gives him a career-ender, I grow a ponytail and name my first-born "Falafel."

Which is essentially a long introduction to my proclamation that the official website needs to stop calling the Greek Soto. I've noticed it on a few occasions---first when reporting Rafa's feelings about the Greek's attitude, and next when Tommy Smith underlined his importance for the derby. It cannot stand. The man has become an icon, a tower of strength, a bearded and ponytailed black hole for opposing strikers. Soto calls to mind a Southern California trust-fund baby, spending his days sipping cappuccino, wearing ironic sunglasses and male capri's, with his nights spent smoking pot at beach-side bonfires, pretending that he likes classical music and Hemingway's "early" work. A life for some (read: me), but not the Greek, whose bones are surely made from adamantium and regularly toes the line between reality and mythology. Landon Donovan, beware.

**For the record, I'm actually excited that Landon Donovan has done well so far---it's always nice to see an American doing well in the Premier League, and it's especially nice to see an outfield player doing well. I just hope he fails miserably Saturday.**

--Say what you want about Ryan Babel, and I think pretty much everyone has at this point (self included), but the kid has to have some thick skin. Now Rafa is playing the "like a new signing" angle with the oft-disillusioned striker/winger/emcee, which is not exactly a compliment and not exactly an insult. Entering "we had tried to offload you and benched you, couldn't find the right price for you, so now let's forget about the past, at least until the summer window opens" territory. It's almost gotten to the point that I feel bad for him, given that he's been in the friend-zone with Rafa Benitez forever. Rafa, such a prude.

--The agent doth protest in the Milan Jovanovic pre-contract agreement, reporting that Jovanovic has not signed with anyone as of yet. His agent is no stranger to name-dropping apparently, with "plenty of interest from Spain...also a number of clubs from across Europe that remain keen." Perfect, just what Liverpool need, a bargaining war with the Serbian Drew Rosenhaus.

--And just like that, Rafa's moved on. Not exactly, but rumors that the club are looking at Alexander Jacobsen, the "Danish Ronaldinho." At 14, he's got some growing up to do, and it looks like Rafa wants that growing up to happen in the Liverpool academy. If nothing else, it looks like the young man is on the Ronaldinho dental plan, so there's always that.

Capping it off with some derby-related news, outside of debilitating Landon Donovan hate:

--Leighton Baines gives the standard "if you're not up for this one, you need to check your pulse" quote to BBC Radio. But he is right about the importance of the result, and I think it's a strategy that's served Everton well recently. To some extent that's what Liverpool's starting to do as well. Which could make for a horrifically ugly match on Saturday, but as Baines says, "It's just the result, that's all that matters in a derby game."

--Sammy Lee is of a similar mind, underlining the importance of getting the result, and he also speaks on the unique nature of the Merseyside derby. I always like reading interviews with Sammy, he's a good character and has a passion for the club, and while he occasionally slips into manager-speak, he's often candid about the issues.

To close, another derby video, this from last season's FA Cup match at Anfield, with the assist of the season from Fernando Torres: