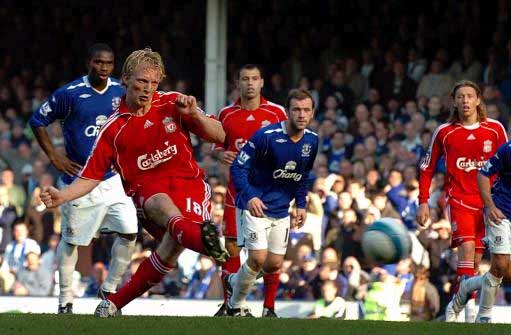 Recapping the news of the past few days as Saturday morning's derby creeps closer...

Looks like the deal for Stadard Liege striker Milan Jovanovic has been wrapped up for the summer. If Liverpool had the cash, this would have been a great signing in the January window. As it is, he'll be cover for Fernando Torres, and might cause some questions about where the younger talent will fit (read: David Ngog, Dani Pacheco, et al.). I doubt that he'll come in and displace anyone immediately, but 28 isn't the age that most people are thinking they'll agree to join a club and never see the pitch. Unless you're Andriy Voronin, then, score!

And attack, apparently, is something Rafa has noticed is lacking. He touches on a few different points here: the necessity of Carra's experience for cover at right back, acknowledgement that there's been more gaps in central defense than he would have liked, and the importance of improving in attack. I think the performance against Bolton was a step in the right direction, particularly in attack, but I'm cautious after so many "steps in the right direction" already this season that were quickly followed by tumbles backwards down the stairs.

With Rafa touching on the concerns at the back, it's worth noting that there is some encouraging news: Fabio Aurelio, who suffered a calf injury against Stoke, is back in training and will be in the mix for the squad this Saturday. His disappearance from the team sheets was never officially confirmed---it always had to be injury given the Brazilian's history, but we were left in the lurch a bit as to what exactly was going on. The other bit of news defensively is that Martin Kelly is back with the squad and had a run-out in the reserves match the other night, as did Nabil El Zhar. Doubtful that either will have a place Saturday, but Kelly turned in a couple of stalwart performances earlier in the season and provides the much needed cover that Rafa spoke of in defense. And all three are included on the Europa League squad list, released yesterday. That doesn't mean a whole lot, though, considering Nathan Eccleston makes the squad while he's scoring goals for Huddersfield Town. It would be nice to see some younger talent, however, and that squad list is full of it.

The Rafa rumor mill has died down a bit, mostly due to a week devoid of fixtures, but Albert Riera chimes in about the loyalty of Liverpool's Spanish contingent. It's got to get tiresome for the players to consistently answer questions about "what if..." To his credit, Riera seems to be candid about where the players, at least the Spanish ones, stand in their commitment to the club. Might be an entirely different story should something actually happen with Rafa's post, but for now it's comforting to see that there would be no worries if he left.

And for those of you looking for a quick nap, here's some club banking news. Basically, the club needs to raise £100million of new investment for the banks, it's difficult to raise that type of money, Gillett and Hicks are renowned nincompoops when it comes to attempting to act in competent manner, and this is a good reminder that behind the scenes, things are still a clusterf*ck.

Need another reminder? Well good, because Christian Purslow is happy to oblige. The club's managing director recently met with Spirit of Shankly to discuss all things Liverpool, and surprise! There are two different accounts of what went down, and as is the norm, it's splashed all over the papers. SOS say Purslow is a modern day Machiavelli, organizing a coup to push the owners out, but Purslow denies any such claims, confirming only the news about debt. Both have an excellent track record of honest dealings (*wink*), so it's a toss up. Back to football, eh?

So to close it off, a link to the Daily Post's review of the most notable Merseyside derbies of the early aughts, and a choppy fan video from the stands of Torres' winner at Anfield in 2008.