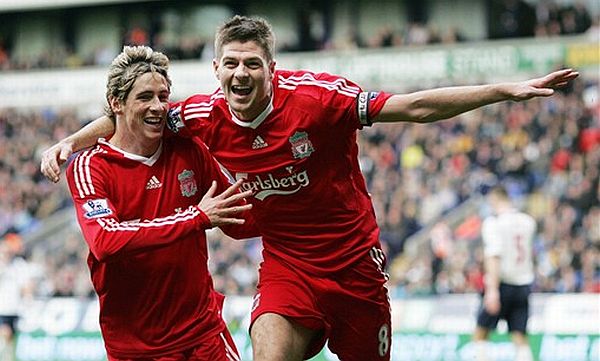 Steven Gerrard and Fernando Torres get Liverpool past Blackburn.

At the time of kickoff, the victories for Manchester City and Tottenham meant that Liverpool had no room for error. After the troubles of this campaign, though, this was always going to be the case. But it's added, and certainly unwelcome, pressure for a side that has managed to create plenty of pressure on their own. It's the way the rest of the season will play out---checking the results of three other teams and hoping for the best, all the while recognizing that Liverpool have plenty to do for themselves.

And thankfully today, they did just enough. Prior to kickoff it looked like Big Sam and his size 11 head were right---Rafa's starting eleven was about as strong as Liverpool could get in attack, buoyed by the return of Fernando Torres, who was supported by Yossi Benayoun, Maxi Rodriguez, Dirk Kuyt, and Steven Gerrard. The captain was to be in a more withdrawn midfield role, but we were never going to see him out of the action up top. The real surprise was the inclusion of Javier Mascherano at right back, although given his past successes filling in at that role it wasn't a total shock.

The real surprise, at least for me, came after kickoff. For all the talk of Liverpool storming out of the gates, it was Blackburn that came directly at Liverpool, winning a few early corners and forcing Pepe Reina into action on more than one occasion. The chances from corners were most threatening, particularly considering Rovers' proficiency on goals from corners this season. Morten Gamst Pedersen was most notable, hitting a right-footed arrow at Reina; he would later fire successive left-footed drives on goal that were also saved well by the Spanish goalkeeper.

In between those chances by Pedersen, however, Liverpool were able to get their breakthrough. Not entirely against the run of play, as they had finally started to press into Blackburn's final third. And it was a fine, flowing moving that led to the opener---which is saying something, considering "fine" and "flowing" are not words that have been used to describe Liverpool in attack this season. Steven Gerrard capped off an attack that started around midfield---Lucas to Gerrard, give-and-go with Kuyt, spread to Benayoun on the wing, who lingered until the captain streaked in the penalty area, and his long first touch actually proved useful, as it gave him the space to shoot past Robinson with a fine left-footed effort.

By all accounts it looked like a continuation of the mini goal rush that started midweek. But Blackburn were right back into it, with the aforementioned efforts from Pedersen coming almost immediately after Gerrard's opener. The sides seemed to settle in a bit, exchanging fouls in the midfield area in a game that was becoming increasingly physical. But in the 40th minute, a weak clearance from Benayoun would lead to the equalizer.

The Israeli had tracked back well, but he could only send a spinning ball as far as El Hadji Diouf. The Liverpool villain found Nikola Kalanic on the edge of the penalty area, and after a bit of a scramble that led to Jamie Carragher hitting the deck, Blackburn had their penalty. Carra clearly tried to control with his arm while on his back, and his immediate glance to Alan Wiley was damning enough. And Keith Andrews did his best to forgive Carra with a weak effort from the spot, but it was enough to get past Reina, and the match was level.

You couldn't feel bad for too long, as a mistake on the other end led to Torres' match winner. It started with a fine through ball from Lucas to Torres, and while the striker couldn't get on the end of it, the resulting clearance found Maxi on the wing. The mistake I mention was not the clearance, but the strange wandering session from Paul Robinson after Samba's clearance---the English keeper drifted towards Maxi, leaving a gaping net for Torres to hit after his former Atletico teammate sliced in an expert pass. 2-1 to the Reds, and that's the way it would end.

That didn't mean the rest of the match was without incident, though. The match became more and more physical, leading to five yellow cards for the visitors, at least one of which should have surely been red, with Nzonzi mugging Lucas in the 50th minute and pushing him to the ground. It's a small miracle they didn't have anyone sent off, as Blackburn managed to outdo themselves with a style of play that was increasingly ugly, petulant, and, at times, dangerous. All the pre-match talk about Liverpool's regression to a "Bolton-type side" proved to be little more than projection---there were no doubts about which side was comfortable thugging it up. Updated: Rafa weighs in, pretty outstanding stuff from him. My favorite part? "The style of football, I think, Barcelona are thinking of copying."

And unfortunately it was almost rewarded, as it took a late save from the brilliant Pepe Reina to keep all three points. Samba's header after a free kick nearly got past Liverpool's number one, but in a continuation of form that has saved Liverpool's blushes on more than one occasion, Reina pushed it to safety. It would have been a major blow to the Champions League aspirations of the side, and it's thanks to him that today wasn't the day that cast Liverpool adrift.

On the whole, it was another encouraging team performance. Outside of Carra's error, the backline was again resolute, and the transplant (Masch) was probably the most outstanding. He never looked out of sorts, got forward when appropriate, and successfully transferred his physical play to a somewhat foreign position. Hopefully the removal of Aurelio was more precautionary than anything else, but watching him limp off the pitch was not the most encouraging sight. Lucas managed to put together a decent performance, at least partially due to the role definition allowed by the partnership with Gerrard. The captain was responsible for getting forward and distributing, leaving Lucas to break up play, something he did dutifully.

Obviously the presence of Fernando Torres brightened the front four, and as a unit they were roundly positive. Pre-game it looked like Benayoun would be in the "hole" behind Torres, but he spent the day out left with Kuyt filling in centrally; the former combined with Gerrard on the first goal, and the latter was typically blue-collar and nearly scored on an audacious overhead effort. And we finally saw some life in Maxi on the right wing, showing flashes of skill and an ability to deliver cutting balls into the box. Both attacking substitutions had little effect---Ryan Babel's appearance was more maintenance than anything else, and the same could be said for David Ngog after he came on for Fernando Torres in the final minutes.

At this point for Liverpool, it's the Mike Dexter mantra---"Just win, baby." Liverpool can't afford to do anything else, as this weekend reminded us that watching the fixture list won't always produce a fuzzy feeling. Let's just hope for a safe bundle of friendlies midweek that allows for the mantra to be played out.