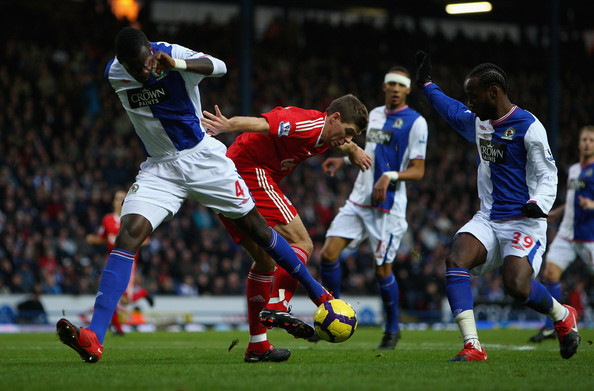 Blackburn visits Anfield to take on a Liverpool side that is in desperate need of all three points.

Ooooooh what blogger was right about Mascherano at right back? Oh, I didn't actually say it would happen? F**k. I said it was possible, at least. Score. Certainly an interesting lineup---obviously Masch at right back is a bold choice, and the return of Torres is welcomed, although it hopefully doesn't contradict the assurances Rafa has been giving about not pushing him too much. Steven Gerrard slides back into the central part of the pitch, which is something a lot of people have been clamoring for. This pushes Aquilani out of the lineup, which unfortunately is not a huge surprise. But this is about as strong as Liverpool can get in attack, so you'd think they'll come out of the gates hard and fast.

Not a whole lot of news this morning, at least nothing that hasn't been covered in the past couple of days. A quick rundown...

--Rafa's still going to be cautious with Fernando Torres, which is simultaneously great news and frustrating. To have him in the side is obviously a boost, to have him in the side and not be able to play is like getting taunted. Hoping he doesn't see many minutes midweek, and if he does he wears a full-body bubble.

--Speaking of world-class strikers, Big Sam is claiming that Liverpool let one go too early---El Hadji Diouf. But has he seen...Does he know that...Why would he...Nevermind. You just keep telling yourself that.

--Carra has done well at right back, but he's been dying to get back into central defense, claiming that he's been played out of position more than any player in Liverpool history. Woah woah woah, has he talked to the 2008-2009 version of Ryan Babel?

--Midweek we'll see some of the squad heading out for international duty--Steven Gerrard will be captaining England against Egypt due to...circumstances, and Fernando Torres and Pepe Reina head to Paris to take on the French national team. Fingers crossed that both matches are uneventful.

--And wrapping it up, Liverpool have won an apparently heated race to sign Raheem Sterling from QPR, beating out the likes of United, City, and Fulham. Into the Academy for the youngster.