Skrtel Out, Johnson In?

Share All sharing options for: Skrtel Out, Johnson In? 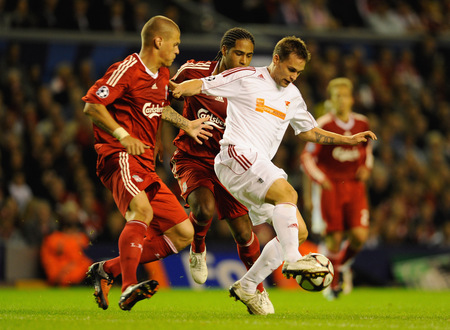 Confirmation from the club that the Slovakian will be out for a bit...

But no definitive prognosis. As steven mentioned yesterday in the recap, you'd expect him to tell his toe to shape up or ship off, but apparently the "doctors" don't think that's such a good idea. I still haven't had a chance to see the injury---not that I'm dying to if it was ugly, but some clarification about the how of it would be useful. Regardless, it doesn't come at the best time (as if there is a best time), with Kyrgiakos still serving his league ban. And to continually reference commenters, it looks like nate's is the best solution for the time being, pushing Carra back centrally and going young at right back.

And the need to go young, likely with Martin Kelly, is because of the lack of fitness of Glen Johnson. He and Skrtel are headed in slightly different directions, though. According to the link above he's back in training and close to a return---not Sunday against Blackburn close, but maybe Wigan a week from Monday. I hadn't given much thought to how long he's been gone until I read that article...he limped off in December against Aston Villa, which seems like it was ages ago. It's a tribute to Carra's versatility, and the play of the entire backline, that despite the loss of the first-choice right back the club have been shutting down the opposition in attack. Johnson also presents something for Liverpool in attack, however, so it'll be interesting to see what Rafa does with him when he's fully fit.

Something I ignored yesterday, either by choice or ignorance, was the record set by Steven Gerrard when he scored his 33rd European goal in the second half, passing previous holder Alan Shearer, who had 32 with Newcastle and Blackburn. Whether it's scored in the Champions League or UEFA Cup/Europa League, it's a major achievement for the captain. Obviously you'd like to see him scoring goals in the former, but any way you cut it he's had a massive presence in European competition for Liverpool. In general he seems to be coming around, flexing his influence a little more. How he'll coexist with Aquilani remains to be seen, assuming the Italian starts to get increased time on the pitch. 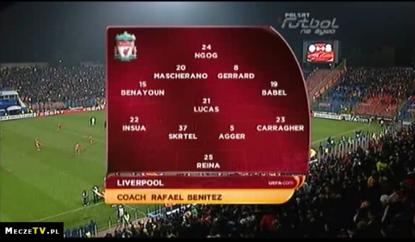 And sort of random, but who the hell is responsible for setting up the formations in the pre-match graphics? It's probably been a problem forever, but I first noticed it in the Merseyside derby, when Masch was playing on the right wing and Dirk Kuyt was in defensive midfield. Then yesterday Gerrard and Masch were playing just off the striker (above). Sure, it doesn't actually matter, but you'd think they would actually want to appear competent. Listening to Robbie Mustoe stumble over the explanation prior to the Everton match was uncomfortable enough, and yesterday the poor bastard on Fox Soccer tried to piece something together about a "diamond shape" in the midfield. Which actually, if we're going to talk about how Gerrard and Aquilani fit together, wouldn't be awful.

Lastly, it's bad news for Portsmouth, who today entered into administration. In terms of logistics, it equals a nine-point deduction for the club, surely cementing their relegation. I know there was talk previously of Liverpool somehow benefiting from all their troubles, but that was only to be if the club were liquidated completely. And to be honest, that's never the way you want to earn points; it's cliche to say, but nobody benefits in this situation. It's a sad day for Portsmouth fans, who by all accounts are some of the more loyal supporters in the Premier League. Hopefully the club can work through the current troubles and find their way back.

Anyway, preview up tomorrow for Sunday's match at Anfield with Blackburn. Enjoy your Friday, folks.