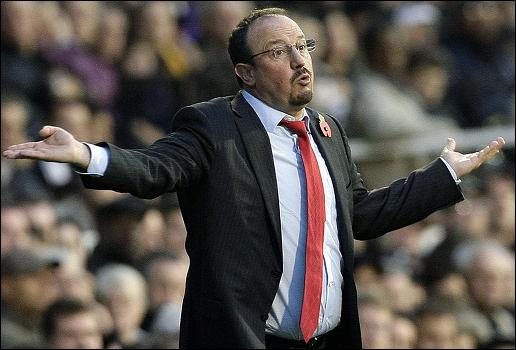 I don't know why it took so long either. But have another Romanian pie to congratulate yourself.

For the first time this season in European competition, Liverpool score more than one goal in a match, and as a result they advance to the round of 16 in the Europa League.

What a humbling sentence. Credit to the previous opposition, but damning for a side that couldn't do anything but score last season. Today, though, we saw (or at least you did) Liverpool break through a bit. Sure, it was weaker opposition, but after conceding an early goal things got a whole lot dicier. And the response we got, consistent with the Liverpool we've come to know this season, wasn't pretty, but it was more than enough. Even at 1-0 down I didn't get the feeling that Liverpool were in great danger---so cheers to Marc from the comments section in the preview, who had the stones to say that he wouldn't be that worried unless Liverpool went down 2-0. Usually my emotions aren't controlled by blog commenters, so I suspect witchcraft. Too bad we're not in colonial Massachusetts in the late 17th century, then I'd really have your number, commenter Marc.

As I alluded to above, I was unable to catch the entire match---saw the full first half and only the dying moments of the match. You know the drill, if you need the full deal check out oh you beauty. So rather than try to piecemeal a match recap, I'm just going to highlight a few points that I felt were worth taking away.

Feels like forever, doesn't it? And honestly, it has been. September, at Anfield, against Hull. Six goals. Since that time? Two has been the ceiling. And not to completely kiss his ass, but nate put up a great breakdown of the impact this has had a few days ago. I'll make sure to insult him in our final discussion of Rafa Benitez to balance things out.

But Liverpool notch three after conceding a senseless goal, with an unmarked Bruno Fernandes nodding past Pepe Reina on a corner to equalize the tie. The manner in which Liverpool responded, however, was impressive---Javier Mascherano hits an absolute bullet straight out of Winning Eleven/Pro Evo on a dribbling clearance, and Ryan Babel does his best Cobra Kai to control a stray header from Steven Gerrard's free kick and slot home. And the skipper got his own in the second half, and from the highlights it looked to be the product of some more fine work from Yossi Benayoun. After the second you almost felt bad for Unirea, who were more than impressive in their efforts in the first half, and I doubt they approached the second half any differently. But Babel's goal put it out of reach, something you can't say about any Liverpool goal in the recent past.

Even after Unirea scored the equalizer, I wasn't entirely unsettled. It's no disrespect to Unirea, because they certainly looked dangerous enough, but today Liverpool carried themselves much differently than in recent matches. I know, I know, it's just Unirea, but it was still a great effort from Liverpool to fight back. And to say that it's just Unirea discounts the effort with which the Romanian champions played; across the two matches you have to say they gave about as good account of themselves as was possible.

So to concede early, on what has been made to be Liverpool's Achilles heel (set pieces), could have been disheartening. Especially against a side that had everything to gain and nothing to lose. But Liverpool never looked panicked, and yet they managed to never look disinterested either. They looked competent, confident, and able to create when they needed it. Just as they should, right? Not so much this season, so it's almost remarkable to see this side in that light, even against just Unirea.

From what I could tell in the first half (Unirea's goal excepted), Liverpool were the beneficiaries of fine individual and team performances. Yossi Benayoun's might have been the most notable, at least in the first half. He was darting around the midfield, slicing in and out as he does so effectively. The absence of Kuyt, in my opinion, was a benefit to Benayoun, who was given a little more license to roam. Ryan Babel's goal will likely help his confidence (not too much though, I hope), Steven Gerrard continues to return to his influential self, and the midfield partnership of Lucas and Masch did exactly what they were asked to. And, all things considered, Masch's goal was among the finest we've seen this season. The anonymity of David Ngog, however, continues to be somewhat troublesome.

And there's little more to say about the backline, who continue to keep Liverpool in match after match. Obviously ignoring the negligence on Fernandes' goal, they were stingy and dominant when they needed to be. I don't know much of the Martin Skrtel injury, which will obviously be a blow, but I'm still confident that they'll continue their strong play. The return of Martin Kelly, who saw second half action, should buoy the defense should Skretl miss an extended period of time. Plus, He's coming back.

It was a welcomed feeling to see a game somewhat settled by the end of the first half. Away goals contributed to that comfort, but a good part of it was seeing Liverpool handle themselves...the way we expect them to. Granted, our expectations have been all over the place this season, but if we're going to talk about the Liverpool Way, this was it. Come up against it early, respond efficiently, leave no doubt about the result. It's something I think we could all use a little more of, and hopefully it carries over to Sunday.