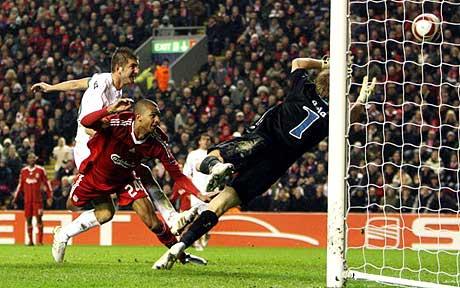 I guess the only real surprise is that Kuyt is pushed to the bench, but he's probably played among the most minutes in the side. It's Lucas and Masch again in the middle as expected, with Babel and Benayoun on the wings and Gerrard playing behind Ngog. No change to the backline that blanked Manchester City, and Alberto Aquilani, Fernando Torres, and Martin Kelly are benchside with Kuyt, the Greek, Fabio Aurelio, and Diego Cavalieri.

OH MY GOD!!! LIVERPOOL ARE IN THE EUROPA LEAGUE!!! Wait, haven't we known that for awhile? Like, since November?

It's a rule for me that I link to any Javier Mascherano interview, particularly when they use everyone's favorite portrait. I talked about this awhile ago, but I think he's much deeper than even he realizes. It's entirely possible that he has reached an operating state of nirvana, and the shouting, screaming, and violent tackles are his mechanism of appearing socially acceptable. "I try to do my best always, sometimes I can and sometimes I cannot." Self-acceptance, the path to enlightenment.

And another must, reading the Sammy Lee interview prior to a match. It's better viewed on the Eseason that the club offers, but that's not exactly in the budget of many right now. I hope that Sammy can eventually find another managing job if he wants, but for me he's a fine number two (stop giggling) and contrasts Rafa nicely.

Speaking of Rafa, he's confident that Liverpool will be in fine attacking form come this evening. He didn't specify if this was the same type of attacking form he promised prior to the Manchester City game, so maybe this should be concnerning. As I mentioned yesterday, though, I don't see any way Liverpool doesn't go through here. If Unirea do open it up, which they'll have to do if they want to try to actually win, Liverpool are more than capable of exploiting the space available.

In more lighthearted (not for Rafa) news, it looks like the Romanian press had a bit of fun at Rafa's expense, or at least they tried to. Credit to him if this is how things really unfolded, as it's likely not easy to first field questions about receiving fan taunts, then what sorts of jobs he's looking for, why he's taking Unirea so lightly, and lastly, why he's so fat. Oof.

And in players I've forgotten about because they're not actually with the club yet news, Milan Jovanovic hits out against the pressure he's been under since the link with Liverpool was announced. He's struggled for form with Standard Liege lately, and the press has attributed it to the constant doodling of liverbirds and goatees he's been doing in his journal. Gosh, guys, lay off, diaries are private.