Share All sharing options for: Disagreeing with Ian Rush: BLASPHEMER! 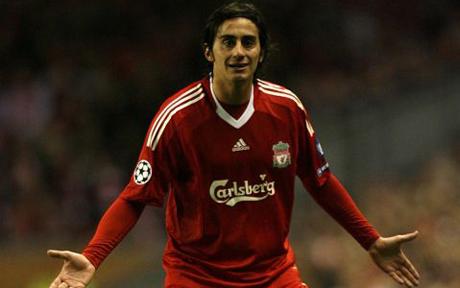 Widely regarded as one of the finest players to don the shirt, Ian Rush is obviously a go-to for commentary on the club. He's smart, he's honest, he knows his football, and he's got a bit more valid insight than yours truly. But I couldn't help but bristle slightly when I read his comments on Alberto Aquilani. From the Echo:

Few Liverpool players have been discussed as much this season as Alberto Aquilani.

As the man signed to replace Xabi Alonso, it was inevitable that he would find himself under a spotlight and there have been some encouraging glimpses from him.

Has he really done enough though? The simple answer, sadly, has to be ‘no’.

One bold display against Tottenham apart, he has found things very difficult and he is in desperate need of a big effort very soon to ease some of the mounting pressure.

Aquilani can clearly pass the ball well but, at the minute, he seems very much of the ‘safety first’ mindset, heading backwards and sideways rather than forwards.

If he gets a chance to start on Thursday night, he simply must grasp it with both hands.

Obviously there's a few things that can't be disputed: he was signed, in some shape or form, to replace Xabi Alonso. However misguided or inaccurate that effort was, that's what it was touted as, and that's what popular opinion has it as. Everyone and anyone has been quick to brand him a failure, no doubt a product of his transfer fee and expectations that had plenty of time to mount.

The part that caused me some bristling is the question of whether or not he's done enough, and I don't think you can answer that with a definitive "no" just a sentence after acknowledging the heights of the expectations. If he was to be the next Xabi Alonso, the missing link between a stingy defense and a world-class partnership up front, was he ever going to be anything other than a failure? And if we're discussing current Liverpool midfielders who play "safety first" and are "heading backwards and sideways rather than forwards," there's a Brazilian Ellen Degeneres lookalike I'd like you to meet.

We all know he was signed injured, spent the first few months with the physios, and the plan was to bring him along slowly. But after being declared fit, from the moment he stepped on the pitch at the Emirates, the weight of expectation came crashing down. I'm just as guilty as anyone else, but it was clear that everyone was hanging on his every movement. Did you see that sixty yard pass he fizzed on a dime? What about that attempt at a bicycle kick in the box? He's IT.

But the thing about it is that none of the aforementioned struggles are righted without time on the pitch. And whether it's fitness, illness, or Rafa's preference, he hasn't had it. Prior to his appearance in the Carling Cup in November, his last match was on international duty against Brazil...in February. With Liverpool he's started seven matches in all competitions, played a full 90 once (which was actually a 120), and has come on after the 65 minute mark 8 different times (half of which were after the 80 minute mark).

It's hardly enough to condemn him to failure, and certainly not enough to deem his time a resounding success. Simply because of transfer fee and the loss of Xabi Alonso, though, we have to rush to a verdict. In a season that's seen so many struggles, it's almost as though nobody deserves the luxury of time. He had to be the one to solve Liverpool's problems, and if he didn't (which he hasn't), he was another pock mark on Rafa's transfer record. A bust, a flop. It's all been written. After three and a half months. Fifteen total appearances.

He could be shitty for the rest of the season and I'd likely still be saying the same thing. It's our nature to want things now, and with Aquilani, in a season flailing so badly, it's no different. We want him to do well and we want it now. Hasn't done it? Failure! I say give him time, lift the expectation, and see what he can do. Not just Thursday, not just in March, but for the rest of this season and beyond.

Unless Liverpool don't get that fourth spot, then fire his ass.