Taking a Look at Ryan Babel

Share All sharing options for: Taking a Look at Ryan Babel 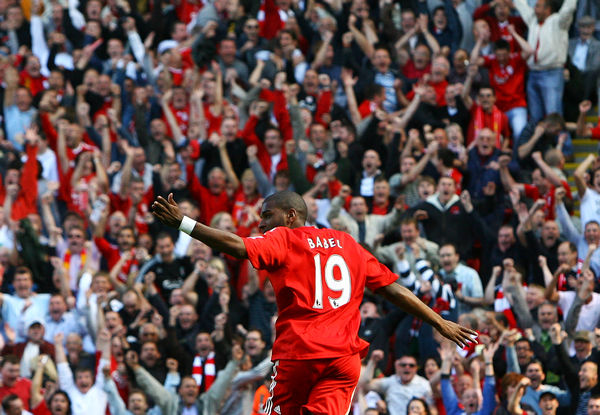 At the time of the transfer:

"He is like the ideal father-in-law. He has a lot of football know-how and he told me that I would be challenging with six other players for four positions. I have a good feeling about things.

"It was very important how the coach spoke to me, how I would fit in his team. After that conversation, I knew it was the right decision."

"I have tried to talk to the manager but it isn't of any use. I couldn't really do anything with the feedback Benitez gave me. We have agreed to look at my situation in the winter. If there's no improvement then, I have to be honest, I want to be somewhere else.

"I don't play a lot so I can't be happy and I can't cheer out loud. Sometimes I wonder how long I can sustain it but I will fight for my position - what else can I do?"

So what the hell happened? In the first season after arriving, Babel featured in 30 league matches, scoring 4 goals and providing Liverpool with some additional pace. He also figured prominently in cup competitions, scoring against Besiktas (with a wonderful backheel), Marseille, Arsenal, and Chelsea. It was clear that he had talent to spare and looked to be one of Liverpool's more promising younger players. He was never really played in a striker's role unless it was later in games, but you got the feeling that he would work his way into the squad somehow.

But in the 2008-2009 season, his appearances dropped, he scored fewer goals, and it was clear that he was anything but working his way into the squad. After scoring the winner against United at Anfield, Babel started to fade into relative obscurity even when he was on the pitch. He wouldn't score another goal for nearly three months, and after that the only times he found the net were in mop-up duty. You could start to get the sense that he was less than impressed with the way he was being handled.

Yet he continued to have potential, the most dangerous of traits. You'd tell yourself, if he could just harness it, he'd be unstoppable. You'd think, if Rafa would just give him a shot, he'd blossom. Sure, Liverpool had Fernando Torres, but there had to be a way to fit Babel in. As proprietor of most of these thoughts, I couldn't help but see that Babel had the talent to make a huge impact on Liverpool's attack. And then, he opened his mouth.

As the 2009-2010 season has unfolded, Ryan Babel has turned himself into Liverpool's own Kanye West. Decent enough at what he does, but when he starts to talk you can't help but cringe. Of course you want players to want to be on the pitch---no good athlete or competitor enjoys the bench, and clearly Babel is no different. Clearly. But it's the interviews, it's the Twitter, it's the full-body wah that has alienated him. And he's got to be the one responsible. It's no surprise after the November and December that he whined his way through, Rafa was actively shopping him. And rightly so, as the last thing Liverpool needed in a season like this was a backroom cancer.

Ultimately Rafa's price wasn't met, and it was clear that Liverpool would hold onto him until at least the summer window. And starting January 30th, Babel had a run of four straight substitute appearances in which he had a greatly positive impact, culminating in a start against Manchester City on Sunday. Who, incidentally, was the last club he had started against in league---in November. He has provided a spark each time we've seen him in the past few weeks, and as I mentioned, his lack of creation against City was less an indictment of him than it was another example of Liverpool's overall lack of attacking prowess.

He's still got plenty of work to do both on and off the pitch. Unfortunately for him, the latter might prove the most difficult. In the last year he hasn't made himself indispensable, and it's largely due to an inability to keep himself in check. In a squad that's desperate for attacking talent, it's saying something that he doesn't feature more regularly. Ability-wise, he's likely one of the more gifted athletes on this Liverpool side. But it's no wonder that David Ngog and Dirk Kuyt are preferred to him, given Babel's propensity to make himself look arrogant and immature. Maybe the January window proved to be a bit of a wake-up call for him, as I still think he could help Liverpool immensely. Hopefully it's not too little, too late.