The best way to have watched the match this morning.

Liverpool and City play out what can only be classified as attempted retinal homicide.

Telling that Liverpool's play of the day, all things considered, was Pepe Reina's save from Emmanuel Adebayor's volley around the 60 minute mark. The best chance of the day for Liverpool was Steven Gerrard's left-footed effort straight at Shay Given. Consider the previous two sentences your highlight recap. 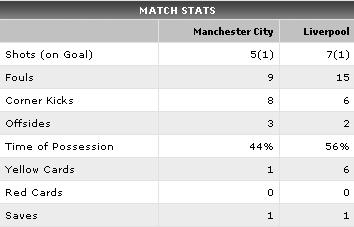 Twenty-four fouls, seven yellow cards (six for Liverpool), one shot on goal for both sides, and a pass completion percentage that is likely in the teens between both squads. It was ugly, it was long, and I'm thankful it's over. That's what she said.

Save for the defense, there's little to shout about. I'm taking less and less consolation in keeping a clean sheet, perhaps because keeping clean sheets is supposed to give the side a better chance at winning. But obviously there needs to be some sort of attacking threat to actually win. Babel disappointed, Kuyt had little involvement, Gerrard was solid if not slightly anonymous. Mascherano was petulant at times and was lucky not to receive a second booking for a challenge on Gareth Barry late in the match. It was good to see Fernando Torres back on the pitch, but like those before him, he couldn't create anything. And putting on Aquilani for the last four minutes was almost laughable. The decision to leave Lucas on for the entire match is surreal---he was dreadful, awful, terrible in nearly everything he did. He certainly wasn't the only offender, but he undoubtedly took more away than he provided. Just a gash.

No sense wasting any more of the morning/afternoon on this one. Try to forget it and hope it's not burned into your eyes like an image left on a computer screen too long.

Hey, look, a monkey sniffing his own butt: