How to Survive Tuesdays and Wednesdays for the Next Few Months

Share All sharing options for: How to Survive Tuesdays and Wednesdays for the Next Few Months 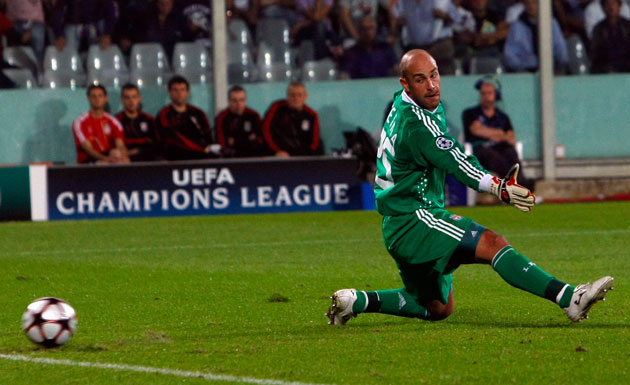 It's tough going right now friends, and you've got to be creative.

So Europe's elite clubs will be battling it out starting today in the round of 16, territory that is quite familiar for Liverpool and its fans. But this year it was not to be, and Liverpool will now ply their trade in the Europa League on Thursdays. It goes without question that Tuesdays and Wednesdays will be filled with the joy of others, something that never fails to make me physically ill. How do we get through it? A few suggestions:

This is probably your best bet. I'm planning to avoid Carlsberg for obvious reasons---it's on the shirt and it tastes like shit. Nothing worse than having two of your senses assaulted at once. Also probably a good idea to avoid Heineken---it's inevitably tied to the Champions League theme song, since there's a commercial for Heineken at least 50 times per broadcast. No need to punish yourself with flashbacks. Bloody Mary's are always a good choice, but they're red, and it could lead you to reminisce about your favorite Red victory in the Champions League. The good news is the more you drink the less you'll remember, and anything you do can be excused to hitting the bottle too hard. This latter part is vital, because your drinking will inevitably lead to tears about Liverpool not playing, and you'll need to defend yourself.

This is the option for those who still want to follow the matches and have an emotional investment. You obviously are restricted from choosing any of the English clubs---if anything, you have to root for them to fail. People would question your allegiance to Liverpool if all of a sudden you sauntered around in an Anelka or Rooney jersey, and rightly so. I'd also stay away from the big clubs---no Barcelona, Milan, Real, Inter, or even Bayern. You could also choose teams that have faced Liverpool and beat them---Lyon, Fiorentina, even Olympiacos. Ideally you can find a club that will make it to the quarterfinals, because once you get to the semifinals you'll have to root against all the big/English clubs. I'm going with Porto, mostly because a few years back on FIFA my buddy and I were able to lead them to glory and created a fantastic backstory for Lucho, in which he gained goal-scoring prowess from deflowering virgins up and down the coast of Portugal. I know he's with Marseille now, but my memories cannot be swayed.

3) Ignore it all together.

This one could be tough, because it's going to be everywhere. If you're a Liverpool fan you've had the fortune of planning Tuesdays and Wednesdays around the Champions League, some seasons all the way into May. If you're going to ignore it all together, you'll have to find ways to occupy yourself. Hobbies are good, and if you're fortunate enough to have a job you can throw yourself into your work. This could even lead to a promotion or some sort of regional accolades, but regardless of how it ends up, conceal the motivation from loved ones and colleagues. You could even go searching for a partner in life, but beware---you still need your freedom on Thursdays, Saturdays, and Sundays. If you take on a partner at this vulnerable time in your life as a Liverpool fan, there's no telling what you'll agree to.

4) Watch the games, but as an annoyingly loyal Liverpool supporter.

Avoid this at all costs, but I know it's going to happen for some. You'll watch the games, bitching about how unlucky Liverpool were to miss the knockout stages, blaming the refs, Hicks and Gillett, Rafa, the players, and everything or anything. You can also spend this time by talking about Liverpool's history, how they have the best atmosphere, most successful English club, etc. Then you can say that on their day Liverpool could beat anyone in Europe, even the best. As you continue to make a fool of yourself and annoy others to no end, keep it in the back of your mind that all this is motivated by the fact that Liverpool played like shit in the group stages and earned their spot in the Europa League. But by all means, do what you need to do, just remember that you're ruining it for the rest of us.

5) Continue to operate as a normally functioning member of society.

This is the least likely of coping mechanisms to be used by Liverpool fans, because if you're a true Liverpool supporter you're prone to fits of irrational rage, joy, cussing, and making baseless arguments with others. Should you be lucky enough to keep yourself in check both psychologically and physiologically, Tuesdays and Wednesdays won't present much of a challenge. You're going to be able to enjoy the spirit of the competition of the Champions League regardless of the fact that Liverpool are not present, and you can also ignore that the draw for the knockout stages was a complete sham. Others that know you as a Liverpool supporter will note your calm demeanor and may even try to coax you into acting out, but you've got too much control to do that. Your personal and professional lives are perfectly balanced, and not a hair is out of place. You see the Europa League as an opportunity, and every day is a day to start anew. And because of this, I hate you.