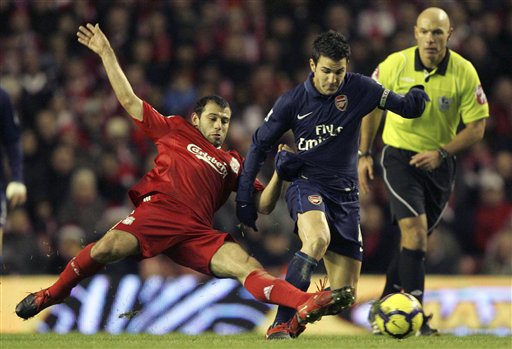 Our heroes travel to the Emirates looking to claw within 2 points of third.

Rafa is coming to the defense of Arsene Wenger for the treatment the Arsenal manager has received in the media of late. nate and I will discuss this in the coming days, but Rafa's certainly no stranger to less than warm treatment from the papers, so I think he's well qualified to speak to this type of criticism. Competitors = bad losers, simple as that. That doesn't excuse a lack of class or blatant excuse-making, but it doesn't appear that Wenger was necessarily guilty of either.

From the Michael Bay school of headlines, Steven Gerrard and Liverpool will crush Arsenal! But actually he just sort of states what everyone already knows--Arsenal have lost two matches in a row, if Liverpool win they close within two points of third, and they're aiming to finish as high in the table as possible. Ooooooooh, controversy.

And Ian Rush agrees---not explicitly with the stealing Arsenal's soul thing, but with the importance of finishing as high in the table as possible. He takes the financial angle, which is really the undercurrent in the fourth-place race, at least for Liverpool. Finishing fourth in and of itself is still a shitty place to be, but for the pocketbook it's massive. You know, so the owners can put most of it into their offshore accounts, and start to pay off millions of pounds of debt with the rest. Cha-ching!

Did somebody say money? Time for a call for investment, this from Rafa. It comes on the heels of some speculation about the potential for new owners, with the seventh richest man in the world, Mukesh Ambani, rumored to be interested in planting some green paper seeds into the club. I get the feeling that some big-time shit is going to go down this summer---the club clearly needs cash, nobody knows where it's coming from, we've seen the impact that a lack of stability could be having on the day-to-day operations of the club...I smell cage match. Three men enter, one man leaves. Now Rafa just needs to get in some training sessions with Mick Foley. Have a nice day!

Two quick notes about players linked with the club, since we're talking about summer investments:

--It came out yesterday that Marouane Chamakh, the 26 year-old Bordeaux striker, is probably headed to Arsenal. This comes after a month or so of speculation about his potential destination in England, and at one point it seemed that Liverpool was the more likely of the two. But this pretty much puts that to rest---not just because Martin wrote about it, although that usually makes everything true, but because there's that whole thing about a pre-contract.

--Which Liverpool seem to have completed with someone else---Milan Jovanovic. After it was nearly confirmed last week, Jovanovic's agent distanced him from the club and spouted about a range of European clubs expressing interest. But now Jovanovic himself has spoken with a Belgian newspaper, confirming that both parties have agreed upon a three year deal. Now we can start the countdown until the agreement is denied, and a menacing picture of George Gillett rubbing his leather-glove encased hands together is released with the statement.

And if you've been obsessively table-watching like me, you noticed that Bolton fell to Manchester City yesterday 2-0, leaving Liverpool ahead of Mancini's men only on goal difference. I actually thought Bolton were pretty decent in the first half, but the foul on Johnson was a stone-cold penalty, and once Adebayor scored the second it was lights-out. We knew Liverpool would have to scratch and claw their way back into the Champions League discussion, and it makes next Saturday's match with City at Eastlands another...wait for it...MUST WIN!*@#!*!