Steady As She Goes

Share All sharing options for: Steady As She Goes 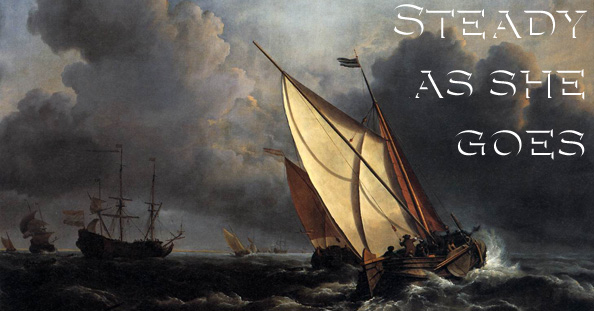 It has become a familiar stalking horse: Roy Hodgson doesn't like change. He doesn't like to change his approach, or his starting eleven, or even make substitutions. There's Plan A, and then there's Plan A, and if you don't like it you can check back in next week for another installment of Plan A. Of course, as the players have taken up a more possession based approach over recent weeks one has had to ask if perhaps this is change of a sort, since the fundamentals being shown now are in many ways closer to those Liverpool used in past years than the ones used to start the season with. Perhaps it is, and if so it deserves a tentative respect. But it's still nowhere near enough when other very basic things remain depressingly unchanged.

It's been noted by many that Dirk Kuyt has looked rather poor in his last few outings, and though he's still clearly putting in the effort it would be hard to argue that his already heavy touch hasn't been that little bit worse, or that he's been popping up in dangerous areas and chipping in valuable goals like he does when on form. With the idea of "on form" of course being a bit of a tricky concept with a blue collar player like Kuyt. What hasn't been noted nearly as often is that on the back of a pair of injuries picked up with his national side he's been playing more minutes than just about any of Liverpool's current A Team, Roy Hodgson's glacially evolving first eleven.

Elsewhere, it was only a week ago that the manager was going to great lengths to describe the need for Joe Cole to find his way back to match fitness, both mentally and physically. It's hard not to wonder, then, why a struggling Kuyt was left on the pitch so long yesterday against a largely apathetic Villa when an early substitution and a few extra minutes for Cole to run on the right with an increasingly adventurous Johnson might have paid dividends down the road for both attacking midfielders. Kuyt appears to need a bit of rest; Cole needs a few minutes off the bench here and there in the hope he can find his mythical form instead of another injury; and the opponent isn't putting up much of a fight.

It doesn't seem as though an aptitude for rocket surgery need be involved when you step back and examine the component pieces, yet Cole sits and wits interminably, and it is increasingly puzzling.

The situation is frustrating to watch, as much as anything because this aversion to change is at a position of strength. In the naturally narrow formations Liverpool's current squad are best suited for--and that more and more they are in fact setting up in, at least in the league--that collective of somewhat jack of all trades attacking players includes the aforementioned Kuyt and Cole, as well as Maxi, Gerrard, Jovanovic, and arguably Babel and Pacheco (as well as Aurelio as a more defensive option, going by a few of his recent appearances off the bench). That's a lot of players to squeeze into two or three spots, but it also gives Hodgson a great deal of flexibility to react to form and fitness from match to match as well as make quick changes based on performance within a specific game. With the thoroughly decent options available there's no excuse for not giving a tired player a rest, and there's really no reason whichever player is on form and healthy shouldn't be asked to run their socks off knowing that if they start to tire towards the end there'll be cover on the way--while if they don't run their socks off until they do need to be substituted, there will be someone else willing to it from the start.

In the end it seems to reflect Hodgson's insistence on making Plan A work come hell or high water or opponent equalizers, and while there can at times be an argument for giving players the chance to work out any kinks or momentary dips in form and get things right--especially if you're dealing with a player who has a history of top level performances or, alternately, if you're dealing with a position of relative weakness--there are times like yesterday where it appears more than anything to be a kind of senseless stubbornness. Nothing more or less than the in-match equivalent of "My methods have worked for 35 years and I'm not about to change them now," if you will. The players, those narrow attackers, are there, giving options the likes of which don't exist anywhere else in the squad--even Liverpool's depth at center back doesn't come close to the list of generalist "attackers" available. Plan A, one imagines, should really be to get the best out of the players on hand. Instead it appears to embrace a stubborn disdain for one of the squad's few real strengths.

Meanwhile, with Gerrard's return against Newcastle seeming probable and any individual whose opinion is worthy of respect strongly in favour of keeping the Lucas-Meireles partnership together for at least the foreseeable future, it's about to become even more congested no matter who gets thrown into which of the four most attacking roles on the pitch and quite how they're set out tactically. Because as has become increasingly obvious, Hodgson doesn't like to make early substitutions or rotate his squad, and even if the team is showing encouraging signs of trying to play football and get the fullbacks down the pitch the numbers suggest that if he doesn't start to change his ways at least a couple of players good enough to do a job for most Premier League sides will be spending an awful lot of time twiddling their thumbs. The numbers, then, are as follows:

In the first thirteen matches over the first two months of the season, the average first "naturally occurring substitution" came at the 72 minute mark. There was a match against Trabzonspor where Torres was scheduled to come on at the half for Babel no matter what, leading to a rather puzzling situation where the first half's best player and scorer of Liverpool's lone goal was yanked. Then there was the Sunderland match that saw Konchesky injured on 28 minutes. On those occasions the first substitution used in the average occurred at 73 and 62 minutes into the respective matches.

In the second thirteen matches over the last two months of the season, that substitution time has come down a minute to the 71 minute mark. Similarly noted exceptions would be Torres' injury against Blackpool on 10 minutes, and a planned halftime substitution in both legs against Napoli, with subsequent substitutions at 60, 65, and 65 minutes respectively.

Liverpool may be getting a little bit better--even if it is only a little bit--when it comes to the general gameplan and tactics with the now definate move towards 4-2-2-2 variants and possession that allows the fullbacks to provide width. However, better in-game management is still desperately needed for the club to maximise its potential this term, and that starts with rotation in the attacking quartet to keep everybody fresh match-to-match as well as earlier substitutions to allow harder running from the starters and fresh legs in the final third of matches. Thankfully Liverpool has the depth to do this, to rotate and substitute liberally at positions likely to need it most. The only question remains whether the manager can knock ten minutes off the time he makes his average first substitution to best utilize the talent on hand.