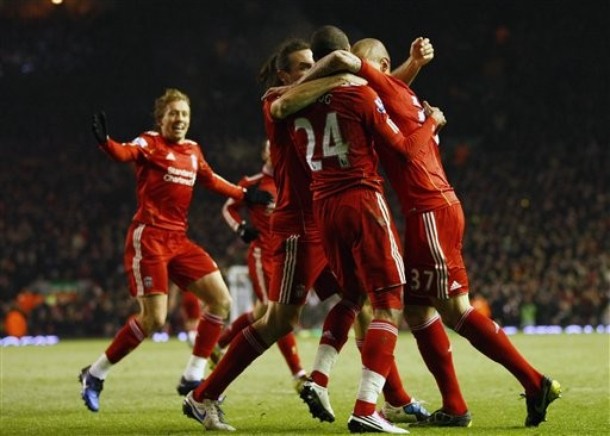 Liverpool take it to Villa and run away with a 3-0 victory.

As with the victory over West Ham a few weeks back, I think this has to start with an acknowledgment of the dismal form of the opposition, at least for the first 45 and the latter part of the second half. Villa looked listless and uncertain, rarely threatened goal, and seemed content to merely survive large portions of the match without putting up much of a fight.

That doesn't take anything away from Liverpool's performance, although I think it informs it well enough. But let's not completely rain on the parade.

For the opening twenty minutes or so, Liverpool took advantage and more or less did what they wanted---they got forward, pressed relentlessly, and got two well-taken goals as a reward. Raul Meireles was superb in his delivery from set pieces, Ryan Babel and David Ngog were an encouraging partnership in attack, and Lucas continued his fine form in the central part of midfield.

The opener came from one of the aforementioned Meireles deliveries, and after a firm header back towards the goal by Martin Skrtel, Ngog flashed through and headed past a helpless Brad Friedel. An early goal was certainly a welcomed sight, but the concern with Roy Hodgson's Liverpool is that there's little sustained pressure after taking the lead---get a goal, sink back, hold on. Today we saw something different, though, and within five minutes Liverpool were able to add another within two minutes, this time from Ngog's strike partner, who was the beneficiary of a sublime chipped through-ball from Lucas. Probably a shout for offside, but the delivery and the finish were plenty impressive.

From there things spiralled a bit---not to the extent of Wigan, but there was a noticeable let-down as the half wore on, and had Villa shown any sort of intent, it'd have been more worrying. Liverpool were sloppier and more willing to concede possession, and thankfully Villa had nothing to do with it. Up 2-0 took away the sting of it, but the "no goals against us" shout from Hodgson was a little too familiar.

It was clear that a similar message was delivered during the break, because Villa came out on the front foot to start the second half and were unfortunate not to peg one back. The best chance came from Gaby Agbonlahor after Stewart Downing played him in, but Pepe Reina did well to save from close range, and Paul Konchesky's clearance ended the threat.

The capper would come only minutes later, with Maxi Rodriguez starting and finishing a swift counter attack. The Argentine was released by a fantastic Pepe Reina delivery, and after playing Ngog down the left, he finished with a coolly slotted effort into the far corner. You felt like Villa were only moments from getting their first, which made Maxi's goal all the more important.

From there things went about as planned---some ebb and flow from both sides, a couple spells of pressure from Villa, a little bit of flare from Liverpool, and all-in-all a welcomed way to see out the match. A little late from Hodgson on the substitutions considering the way the match was finishing, but thankfully an uneventful finish on the whole.

This makes three matches on the trot that Lucas and Raul Meireles have absolutely dominated in central midfield, and it's not small wonder that Liverpool have looked progressively better overall. The two have developed an excellent chemistry both moving forward and tracking back, and all that's left now is for Meireles to capitalize on a twenty-five yarder. Lucas, more and more confident in all facets of the game, now has to be seen as one of the more influential players in the side.

The partnership of Ngog and Babel will get attention because of the goals, and rightly so, but it was the rest of the work they did today that made their performances noteworthy. Over the last two matches Babel has been consistently forward-thinking, and at times he's almost too much so in comparison with the rest of the squad. Not a knock against him; rather, at least for me, a good indicator that he's got plenty to contribute. The vision and stand-up play of Ngog is similarly encouraging, and positionally you have to say that he's made tremendous strides.

There's little that needs mentioning in defense---outside of a somewhat frantic ten minutes to open the second half, they were sturdy and did what they needed. Better from Konchesky, but I still don't think he's deserving of a spot in front of a fully-fit Fabio Aurelio. Good displays on the whole from Skrtel (who made his 100th appearance) and Kyrgiakos as well, even if the latter wasted a couple of chances on goal, and a solid match from Glen Johnson as well.

And even though he had little to do today outside of the save on Agbonlahor, this one ends with a nod to Pepe Reina, who marked the day with his 100th clean sheet in a Liverpool shirt. Supporters of other clubs might not share the opinion, but he's one of my favorites, and there's few players more deserving of such an honor. Well done, and here's hoping for many more.

Overall, a good way to start the week, and the casual finish bodes well for a short week of rest. There was little about this match that felt intense, so hopefully everyone's rested and raring to go come Saturday at St. James'.

And hopefully that Torres kid turned out alright.