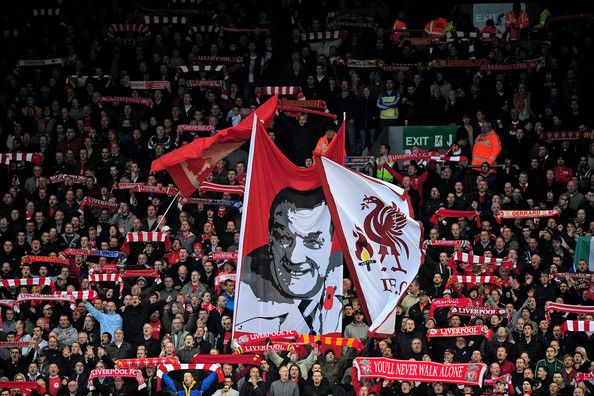 ESPN3.com is also showing the match for those with the service.

Big news here is that Ryan Babel takes the place of Fernando Torres in the starting eleven, as Torres' wife has gone into labor. Great chance for Babel here---obviously not great to lose Torres, but Babel's got to see additional minutes as an opportunity to build on the performance at Steaua midweek. The rest is as expected---interesting to see if it takes shape as a 4-2-2-2, as a few of you have mentioned, or if the presence of Babel shifts things a bit.

The latest from Dion Fanning was making the rounds yesterday, and it's about as pitch-perfect a read as you'll find on the topic of Roy Hodgson. The full article can be found here at the Independent, but I've snagged a few of my favorite bits:

On Hodgson's away record:

"Hodgson, as he repeatedly reminds people, may be one of the game's most respected figures, but when he walks through the front door of a football club, he is also a walking, talking three points for the home side. All that is left is to choose the wine. They spend a lot of time talking abut wine."

On the draw with United in the FA Cup:

"Hodgson last week described Liverpool's draw in the FA Cup with United as 'sad.' There are eight members of the team that won 4-1 at Old Trafford still in Liverpool's squad. Hodgson will be able to pick on seven of them and the painful decline of Jamie Carragher means he will not miss the eighth."

On the displeasure with Hodgson thus far:

"Yet Liverpool fans were pretty patient with Benitez and that was six months ago. It may not be the times that have changed just the credentials of the incumbent. Hodgson's supporters still point to his record, highlighting in all seriousness his exploits at Fulham. There is no real success. Hodgson has never won a league title outside Scandinavia. His methods, as he put it himself, 'have translated from Halmstads to Malmo, to Orebo to Neuchatel Xamax, to the Swiss national team.'

Liverpool fans are not showing impatience with Hodgson, they are voicing their feeling that he was the wrong appointment for a club that demands more than going a year without an away win and nobody noticing."

"Tomorrow promises more warmth and conviviality. Hodgson and Houllier will talk about their mutual respect and reflect on their great gifts of survival, skipping over their exploits which have earned them such admiration from their many friends in football. A draw would be the most fitting demonstration of this great bromance."

And, right on cue, Ged pronounces Hodgson the man for all Liverpool seasons:

"I saw Liverpool play against West Ham the other week. They are back. I am sure Roy will turn it around at Liverpool. He will do it. No problem. Give him a bit of time. He needs to change a few things. The problem is at Liverpool, when you lose, it's a crisis."