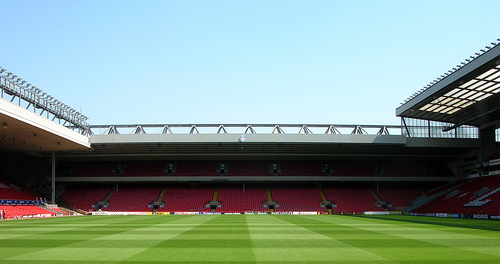 Match shown live on Sky Sports 1 (HD) in the UK and on Fox Soccer Plus delay in the US.

Check LFC.tv an hour before kickoff.

Normally I'd be around to update the team sheets once they're released, but my wife scheduled her 25-week check-up today for about two hours before kickoff, so I'll be racing back to try to catch the start of the match. The thought crossed my mind that I could sit this doctor's visit out, but the combination of her schizophrenic hormones and having her parents still in town tells me that saying, "Nah, I'm going to stay home and huddle in front of my laptop while wearing the jersey of a man younger than me" would be a bad idea.

Anyway, check the links above or the comments section below for the updated squads. Twitter's also a good place to get the breaking team news, and nate from oh you beauty almost always has the teams as they're out. As has been the case for most of the season, there's a leaked team sheet floating around the internet, but nothing confirmed to report at the time of writing.

It wouldn't be a matchday post with a quick Roy Hodgon Reality Check, so here goes:

"My concern is the same concern many of my colleagues have - that the programme in January and February looks very hard to fulfill. I won't use the term 'fringe' players because we've got a strong squad now everyone's fit again, but certainly we're going to need our 18 senior players who are experienced and ready to play Barclays Premier League football.

"We'll need them because firstly I'm sure we'll suffer one or two injuries and secondly because we'll need to freshen the team up. I can't expect the same 11 players to play a game every three days for the next two months, and for them to play top-class matches. The message is: you've got to be ready. That's always our message, but they'll see the wisdom of the message more in the coming months, simply because their opportunities will be there."

Final note before shoving off for the day---there will be a period of applause before today's match to mark the passings of Avi Cohen and Bill Jones, both former Liverpool players who lost their lives in the past few days. Sad stuff any time the club loses one of its own, and no doubt today's remembrances will be done right.