Looking Back at 2010 on the Liverpool Offside: March

Share All sharing options for: Looking Back at 2010 on the Liverpool Offside: March 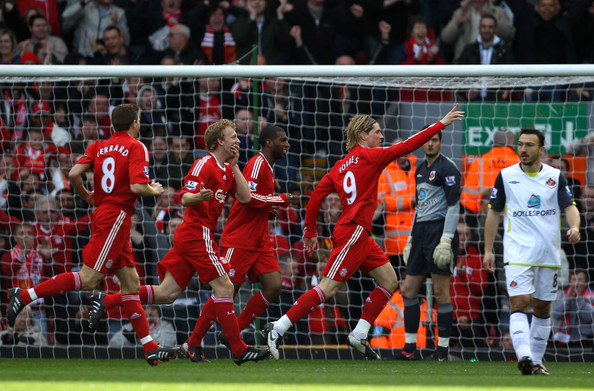 Some highs accompany the general slide towards disappointment.

Liverpool's progress in the Europa League ensured that there was still plenty of football to watch, but the successes on the continent couldn't mask the problems that the club continued to encounter in league. Big wins over Portsmouth and Sunderland couldn't erase the disappointment felt in losses away to Wigan and United---the former was one of the worst performances of the season, and the latter came after Fernando Torres had given the Reds an early lead.

The banner picture was from one of the better moments of the month---Torres' curler from the edge of the area against Sunderland was probably the highlight of March, as was Dirk Kuyt's befuddled "bwahaha"ing in response to the goal. Nice way to finish the month, but sadly they couldn't sustain that form for the rest of the season.

Here's what else went on in the month on the blog:

"Oh, dear. So I guess that he won’t be involved in tomorrow’s match with Lille?

There’s two ways this goes: one, it’s a sham, he releases an official statement on the club’s website, states his love for Liverpool, the fans, the club’s history, blah blah. He would never say such things. Misquoted. The other possibility is that Albert and Rafa have a cage match at halftime tomorrow in the center circle. If Riera wins, he plays out the rest of the season. If Rafa wins, Albert becomes Rafa’s personal facial hair manicurist and doesn’t see another minute of pitch time.

I’m hoping for the latter. Not because it would prevent Riera from playing, but because…cage match."

Written in response to Riera's sound-off about the style of play under Rafa Benitez, which included assertions that "At Madrid they ask you to win and play lovely football. We are effective, sure, but we don’t play brilliant football." Followed by an apology, but ultimately a big piece of the puzzle that led to his departure earlier in the season.

"It could have been a tale of one half. At least statistically, the first half was one that was so dissonant with the Liverpool we’ve seen so often this season that I wasn’t sure how to take it in. I’m still not sure that I can. Combine that with a passing display that has only peeked its head out on rare occasions, a passion filling Anfield that has been relatively absent far too often, and a scoreline that could have been 6-0, and you have, without a doubt, the best half of football Liverpool have played all season. You know things are going well when the low point of the half is a couple of missed chances from Fernando Torres and Daniel Agger. Pepe Reina was never tested, Agger was practically a third forward, and Steven Gerrard just dominated proceedings. Sunderland were, for all intents and purposes, an afterthought, at least until the second half.

And that’s when you thought that it couldn’t possibly continue—the Liverpool we’ve watched this season couldn’t dominate a game like this for a full 90. To be fair, they didn’t, largely due to aggressive substitutions by Steve Bruce early in the second half. But even then, Liverpool swiftly dismissed any fight Sunderland put up and asserted themselves as the only team that had a chance to win this game. As I mentioned, it’s not a Liverpool we’re accustomed to seeing this season—but it was joyously uncomfortable to see things come together in such a manner for Liverpool."

A win over Sunderland, sadly, as one of the high points of the last few months of the season. Dizzying heights, aren't they?

Back tomorrow with April's iteration, and if you need a boost, just click back to Noel's pleasant reminiscing of the 2006 FA Cup Final. Or, liquor.