Liverpool 1, Steaua 1: Wake Up and Read This

Share All sharing options for: Liverpool 1, Steaua 1: Wake Up and Read This 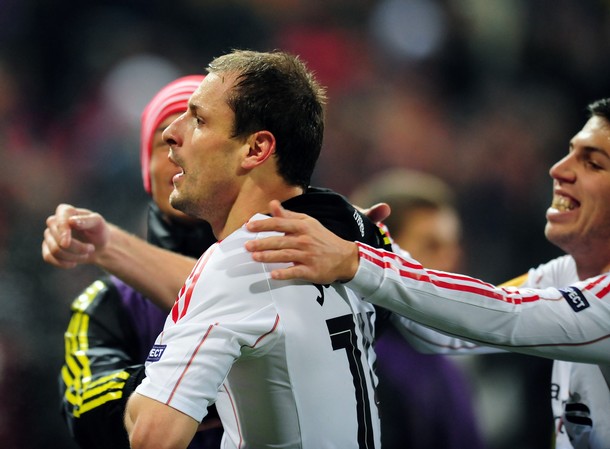 And outside of that nice interplay between he and Ryan Babel, you're lying to yourself if you thought this was enjoyable.

Boring and passive for much of the 94-odd minutes played, this was the Liverpool we've come to despise. Passive, hoofing, then passive and hoofing, followed by more passivity and more hoofing, it was an exercise in not trying to win for nearly the entire match. Up 1-0? Chrissakes, get back and defend! A brief period of possession and pressure directly followed Steaua's equalizer, but that fell by the wayside as Liverpool sat deeper and deeper, more and more content to hoof and sink. Predictable, frustrating, but ultimately, another performance that will be explained away as a means to and end and a deserved and quality result.

It was a bit of a mish-mash both collectively and individually, and I'll be curious to see what Roy Hodgson has to say in the post-match comments. Yesterday he was more than happy to pre-emptively absolve any and all non-regulars of guilt, but I can't imagine that he was impressed with anyone's performance outside of maybe Jonjo Shelvey, Milan Jovanovic, Danny Wilson, and Pepe Reina, even if the latter's moment of madness was to blame for the Steaua equalizer.

But it wasn't anything near overwhelming or encouraging from anyone, really. The tactical approach mostly neutered any accountability from the forward men, and Christian Poulsen and Shelvey were largely invisible for most of the match. Most of Shelvey's influence came while tracking back, as Steaua completely dominated possession and could basically wait for a hoof to arrive at their feet. And as bad as he's been, I found myself almost desiring possession for Poulsen, whose name was barely uttered during the first half. Tactically they were there to serve a different function (read: watch the ball sail over their head), but this pairing was worlds apart from Lucas and Raul Meireles.

The defense was just stable enough for most of the match---the lone quality chance in the first half came on Sotirios Kyrgiakos' bobble, but outside of that they were largely resolute for the first 45. Nice to see Fabio Aurelio return, even if he was slightly off the pace at times, but Martin Kelly had his first real struggles of the season, as Cristian Tanase got forward at will and nearly created a handful of chances for the hosts. Encouraging stuff from Danny Wilson, though, and it's hard to be upset with a defensive unit that spent nearly the entire match in action. Eder Bonfim's equalizer was an absolute collapse from Reina, but with so many other chances allowed for Steaua, you have to say Liverpool are fortunate it was the only one.

Joe Cole's performance will probably get plenty of press, as will his parting thoughts, and I think it's justified. It was clear he was anything but ready to go today, bottling a clear chance and looking like a man who wouldn't have featured even if he was fit over the past month. Unfair to condemn him on today's performance alone, but it's clear that he needs to get up to speed relatively quickly if he's going to break through. Didn't do anything to answer my pre-match wonders about how he would fit---right now, he wouldn't.

The same goes for the rest of the front six, maybe excluding Jovanovic. Again, there can't be any sort of conviction in blaming them for basically trying to operate in a system that has little use for them, but they were a disorganized and confused-looking unit when getting forward. There was little urgency in possession, and when they did move forward, it rarely created any sort of quality chance. Jovanovic's goal and Kyrgiakos' header off the bar were, to my recollection, the only times Liverpool threatened.

As I said, I don't think we can come to any definitive conclusions about today's performance other than to say that the personnel weren't put in a position to succeed. Nearly to a man, the tactical approach negated any sort of consistency outside of defense. We can attribute it to inexperience or youth or a tough European venue, but I think that would be ignoring the frighteningly familiar nature of today's display.

So yeah, it was a point, and it means progress in Europe. But beyond that, it felt pretty damn empty.