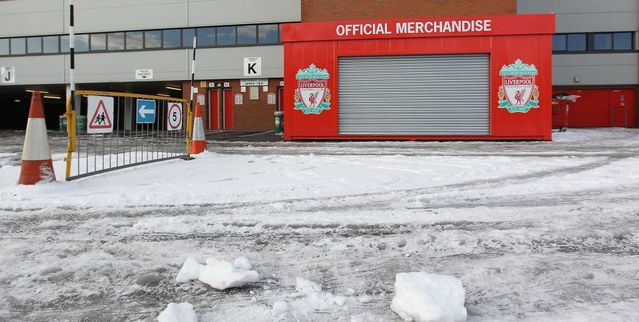 Liverpool Football Club have confirmed that today's game against Fulham has been postponed. The decision has been ratified by the Premier League.

A Liverpool spokesman commented: "Club officials met with the Police this morning to assess the prevailing weather conditions.

"The safety of all fans attending the game is paramount and although the Anfield pitch is playable, the conditions around the stadium and further afield for people travelling to the match are such that the decision was taken, following Police advice on safety grounds, to postpone the game.

With no football, it's now a certainty that I spend the next ten hours being reminded of my shortcomings. No different than any other day, of course, it's just that today I'll have a father-in-law to do it for me. So far he's only fixed the coffee pot and blender. Eventually he's got to run out of appliances.

Do try to enjoy the Saturday, folks, and if you've got to get around in shitty weather, be safe. Don't go all Seattle on us just because there's a couple flakes on the ground.