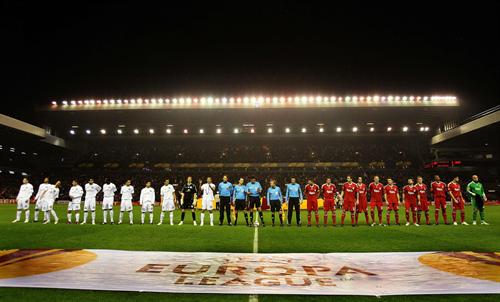 As it turns out, nothing like what we were told would happen. Hodgson's assertions about a strong, first-teamesque starting eleven turn out to be bunk, and all of a sudden we've got a healthy mixture of fresh faces, also-rans, and reserve regulars. Not that I'm complaining---my stab at a lineup yesterday was based mostly off what Hodgson had to say, not necessarily what I had hoped we'd see. Good opportunity for those on the fringe and in development, but another reason to sit back and wonder what the fuck is going on.

Some rumors leaking out about the squad selection for today, but nothing really confirmed beyond the comments from yesterday.

How about more from Roy Hodgson, then?

On the owners' plans:

"They realise it's going to take time. They realise we can't turn things around overnight and they also realise that the team I'm working with isn't the team I put together."

On changes to the squad:

"I still think for a really healthy club, it has to be done on a healthy basis. The players who come in have got to be the right ones for the club. Ideally, you would do something with the Academy as well, so you can produce more of the likes of Steven Gerrard, Jamie Carragher, Robbie Fowler and Steve McManaman along the way."

"I've said to Fernando - and this doesn't need to be a secret - that we believe he's a very fine player, one of the best front players in Europe, and the fact that maybe he hasn't played at his level over the past couple of months doesn't change that.

"I am hoping that he'll have a good game that will improve his confidence. He's happy to play and he wants to play, so it would be foolish of me to not use him. There's nothing to lose."

Once again, he manages to undercut himself and the squad with ill-timed quips about whose squad this is and what its limitations are. Sure, encouraging enough mentioning the Academy and pushing Fernando Torres along and the master plan for the future. Far too often, though, the tone is set by a dismissive comment regarding his role in Liverpool's struggles.

His efforts at copping to some sort of responsibility are the equivalent of telling someone, "I'm sorry you feel that way." Sounds like an apology, but it's essentially saying, "Not my fault."

I get that there's positives to be taken from some of the things he mentions, but for me it's all gone wrong again---leaves us with a sour taste in our mouths and the impression that he won't take any sort of accountability, all too eager to place members of the current squad in front of oncoming traffic.

Nevermind the existing quality in the side, including the high number of holdovers from the record-setting 2008-2009 campaign (8 from both the oft-cited win at Old Trafford that season and the 4-0 trouncing of Real Madrid), or the fact that the current squad's weakest performers have been Paul Konchesky and Christian Poulsen. Insignificant stuff. As long as there's problems, it's someone else's to correct.