Share All sharing options for: Newcastle 3, Liverpool 1: Objectively Not Good 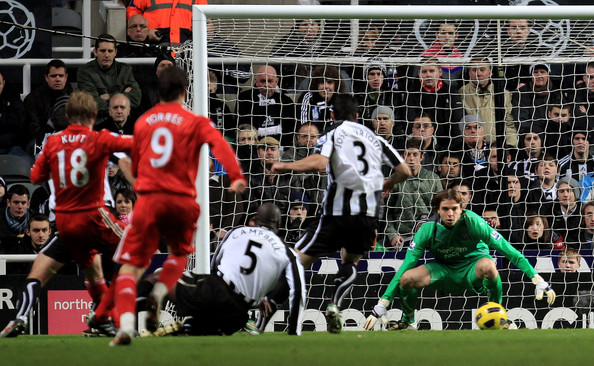 Liverpool take a few steps backwards and have another vintage Hodgson away display.

As I used to do, this will be a placeholder until I have time to get back in front of a computer later on. Errands, snowstorm, pregnant wife making outlandish demands, etc.

Right now all I'm left with is thinking that, unfortunately, we can't be completely surprised by this. Yes, Newcastle were in plenty of trouble leading into the match, and it looked like it was sitting up for Liverpool to turn things around away from Anfield.

But, as it became increasingly clear that Liverpool getting points today was unlikely, that Dion Fanning quote from last week got stuck on repeat:

"Hodgson, as he repeatedly reminds people, may be one of the game’s most respected figures, but when he walks through the front door of a football club, he is also a walking, talking three points for the home side. All that is left is to choose the wine. They spend a lot of time talking abut wine."

So, self-fulfilling prophecy, or just a shit performance across the board? Which takes nothing away from Newcastle, of course, who were more than able to exert themselves on the match and came away with a well-deserved three points. Which, incidentally, draws them level on points with Liverpool. Sweet.

The match started well enough, and the equalizer was fortunate, but you got the feeling that something was just not right today. Outside of the Lucas and Raul Meireles pairing, which continued to be Liverpool's strongest asset, there was no execution and a general malaise that seemed to settle in as the match progressed. We saw Fernando Torres struggle, Dirk Kuyt continue to have some bumps in the road back to full match fitness, and Martin Skrtel have one of his worst matches in a Liverpool shirt.

That makes it hard to tell if the matter in which Liverpool lost is just another line on the horror show that is Roy Hodgson's away vita, or if it was down to a collection of poor individual performances. We've struggled with that quite a bit this season around the blog, and today seemed to be a bit of a shift in the opposite direction--poor peformances by the players that made it difficult to tell what, if anything, could have gone right tactically.

I'll be back later on this evening, likely after drinking heavily, so entertain yourselves in the comments section until then.

Hope you're able to enjoy what's left of the day despite the bad taste that we're left with.