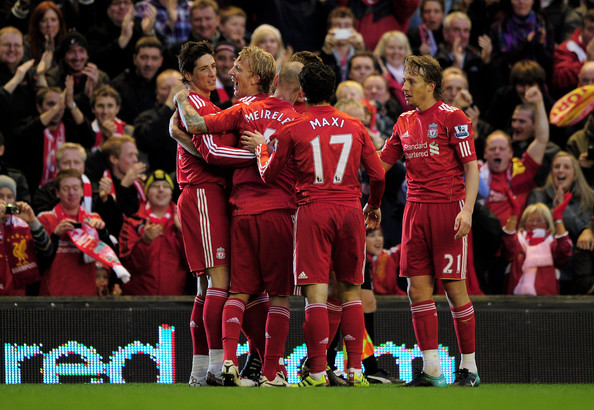 Liverpool get the result we were all too scared to hope for and beat Chelsea 2-0.

It was a stunning performance in the first half from top to bottom. Chelsea looked overmatched and overrun, with Liverpool closing down quickly and moving the ball freely. Fernando Torres will rightly get the plaudits for his brace, but in the first half especially, Liverpool as a collective were just phenomenal. It looked like a 4-4-2 with Raul Meireles on the right and Dirk Kuyt just off Torres, but there was interplay and exchange through the middle and in the wide areas. The service from Kuyt was inch-perfect on the opener, and the second was vintage Torres. Not bad for someone so disinterested. Similarly excited about the role that Lucas played today, as he marked Florent Malouda out of the match and more than held his own against one of the best midfields in the league.

I don't know what this means long-term for Liverpool---this doesn't solve all their problems or wash away the poor start. But what we saw today was the Liverpool we've longed for, and if this is what we continue to get moving forward it'll be a joy to watch.

Back with more thoughts later tonight, off to enjoy the day. Feel free to leave your thoughts below for the time being.