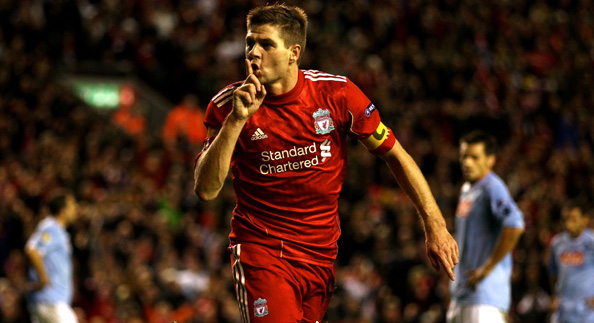 For the first sixty minutes or so it seemed a familiar story, a return to the pre-Blackburn misery of an uninspired Liverpool playing deep and passive football without a single glimmer of hope to suggest they could achieve anything through their own merits. Carragher hoofed, Poulsen was shockingly bad, N'Gog was bereft of service, and half the side was playing out of their natural positions. Then Gerrard happened

, though with more than a little help from a suddenly retreating Napoli side that had until that sixty minute mark played an aggressive game that though sensible was surprising in light of how passive they'd been in the home leg.

The first ten minutes alone saw Christian Poulsen embody everything bad about the season to date, and everything bad about Christian Poulsen as he works his socks off to improve Lucas' stock with the supporters. First he raked a hard pass into touch, putting it five yards in front of his intended target--which would have been alright if he had been attempting a defense-splitting cross-field pass instead of looking to shift it to a player five yards away from him. Then, under no pressure whatsoever off a Napoli corner, his bungled attempt at a defensive clearance left Riena screaming at him. This was soon followed by him caught completely flat-footed against a Napoli break and being nutmegged rather embarrassingly as a result. And all this was, of course, sprinkled in with his usual inability to show any kind of positional sense.

As if that wasn't enough good work for the day, he then went and played a central roll in Napoli's lone strike, a coolly finished effort by formerly rumoured Liverpool target Ezequiel Lavezzi.

Jamie Carragher--who also started the match exceptionally poorly, on three occasions in the early minutes receiving the ball in space, with time and midfield outlets showing, only to hold and hold and hold until Napoli pressure finally arrived and he could launch it aimlessly downfield--pushed up to defend against an aerial ball just outside the eighteen-yard box as Napoli moved forward, and though he did his job solidly enough he lingered, slow to return to the back line. Poulsen then went up to win the resulting second ball, though to say he was trying to "win" it would misleadingly suggest that he was competing with a Napoli player for it in the first place. He got it horribly wrong for the second time in the early going, handing the ball straight back to Napoli, and with a rusty Johnson caught sleeping and Carragher pushed up and out of position Lavezzi was put clear in on Reina to slot it into the bottom corner.

One-nil to the bad, and for the way the rest of the first half played out it seemed unfair to Napoli that they went to the dressing rooms with only that narrow lead. Liverpool had played poorly, with perhaps only Kyrgiakos and Jovanovic deserving of the slightest praise, though as with Torres when the side has played badly this year it's difficult to place all that much blame at the feet of N'Gog given the deep lines and the horrible display by the midfielders any time the defense wasn't bypassing them with route one attempts.

With Hodgson bringing at least one "A-team" player to sit behind the "break in case of emergency" glass, it was only a matter of time until Gerrard would be brought on to try and right the listing, rudderless ship, and Hodgson showed that he could at least be proactive by having his captain start the second half. That he came on in place of Jovanovic, the only attacking player who had shown any signs of life in the first, was beyond disappointing, especially given how poorly Poulsen had preformed even by his own exceptionally low standards. It also didn't help that Jovanovic was both the only left-footed midfielder and the only one who had shown any ability to provide convincing width, and with Gerrrard in place of him it became a five man midfield of Meireles, Shelvey, Poulsen, Spearing, and Gerrard. Five central midfielders, the best player of the first half off, and just a shocking decision by Hodgson when taken as a whole even if bringing Gerrard on early was the right thing to do.

Unsurprisingly, though Gerrard brought a bit of life to Liverpool in possession, the set-up resulted in any and every attack breaking down with half the Liverpool squad packed into the center of the park, and on a few occasions Napoli looked as though it was only a matter of time before they capitalized on the counter against a Liverpool that looked more determined but no more effective. When Hodgson finally removed the regrettable Dane from the fray just after the 60th minute, choosing to send out Eccleston and the hint of width he brought with him, Liverpool quite suddenly looked ten times the team they had moments earlier. Almost immediately, Eccleston's width led to Meireles almost burying the best chance of the match to that point. And not long after that, a sloppy and short back-pass from Andrea Dossena would see Gerrard barrel into the goalkeeper with a sliding half shot/half challenge that would bring Liverpool undeservedly level and see the Napoli keeper carded for protesting Gerrard's aggressive slide.

Suddenly Napoli was on their heels, and whether through nerves or a lack of stamina they quickly reverted to the passive, defensive posture they'd shown while at home, inviting a re-invigorated Liverpool onto the front foot.

However, when N'Gog had to be subbed off for Lucas soon after, having picked up an injury from a frightening studs-up challenge that should have seen a straight red but didn't even get a yellow, the introduction of Lucas to a makeshift strikerless formation showed why it might have been wise for Hodgson to at least include Torres on the bench for the match. With it being played in Liverpool, it's not as though he would have had to travel all that far to sit and watch, just in case. Still, Napoli bizarrely continued to sit back, and after a few minutes with Liverpool seemingly happy to end the game level the home side began to seize on their opponent's docile posture. With Liverpool growing in confidence, Johnson charged into the penalty area and forced another error that led to Liverpool's second.

Johnson's run into the box appeared as though it would lead to nothing when he took a heavy touch as he came at the defender and the ball spun towards the end line, but the Napoli defender he was attempting to knock it around left his leg dangling out as far as humanly possible. Johnson, seeing the invitation, took a step forward rather than turning to chase the ball, and fell heavily over that outstretched appendage. Penalty. And justifiably so, even if Johnson knew full well what he was doing and had set out to earn the call. Gerrard then stepped up to fire a perfectly placed shot into the bottom corner, beating De Sanctis though the keeper had guessed right.

A third Napoli blunder soon gave the recently introduced Lucas a chance to influence the game from the bench, showing again that not only is he vastly superior to Chrisitan Poulsen but that he has a lot to offer the side regardless of who his midfield competition is. Another lazy pass at the back for Napoli and another meaty half-challenge by a Liverpool player, this time by the Brazilian on a Napoli defender, and the ball was poked through for Gerrard to coolly chip the keeper, earing his hat-trick with a brilliant Messi impression. Three points done and dusted, and the unlikely victory sealed after an opening sixty minutes of futility and poor tactics.

Realistically, those three points and a convincing score line can't disguise just how poor Liverpool looked until some time into the second half. Horrible tactics, horrible team shape, passive and deep defending, and Christian Poulsen. Which means it's probably time to queue up some big talk from Roy despite his odd team selection, not having Torres on the bench, central midfielders seemingly filling every role on the pitch for a long stretch, deciding to take off the most lively attacker of first half, and that whole "continuing to show support of Poulsen" thing that won't go away as long as the wrong Dane continues to be given chance after chance.

I can't wait to digest his press conference and listen to him tell us how much this wonderful, flowing, deserved victory against a world-class opponent was all down to him. Another famous European victory earned by his managerial brilliance. Or a suddenly generous Napoli and a fired-up Gerrard saving Liverpool from their manager's continuing blunders.