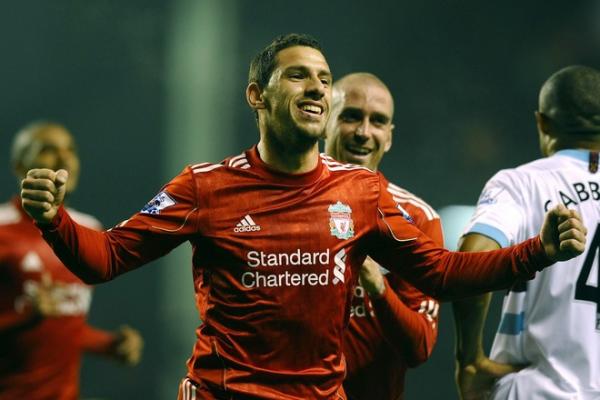 Not sure that we can right now, but it was a much more encouraging display from Roy Hodgson and company, particularly in the first half. We saw Liverpool come away with more than deserved three points---it was dominant, it was comfortable, and it was the relaxed result that we had all hoped would take place.

I may or may not be around later to expound on the immediate reflection, but more than anything I'm left with the thought that this is the type of Liverpool performance that we've all hoped for. Yes, we can attribute a good part of this to a passive display from West Ham, but there's a good amount of it that we can attribute to Liverpool actually taking the match to someone.

We saw it for the first half against Chelsea, and for a large part of the first half today, it could be seen as some sort of forward progress. As usual, the big test will be to see if Liverpool can replicate this type of performance against an opposition that isn't so willing to concede possession.

There's no doubt for me that this squad is capable of doing so, with or without Steven Gerrard (even if Matt Dickinson disagrees), and right now it's just a matter of figuring out what can consistently work for the squad that Roy Hodgson's got, and not what Roy Hodgson can make this squad into.

So good result, good performance overall, particularly in the first half, and let's hope that they can continue. Back after while, let us know your thoughts in the comments.

Glad to hear that Glen Johnson finally got his shit together:

"He was very good. I think he profited from the fact he's been obliged to undergo an enforced rest due to the injury. It's taken a while for him to get over it, but he's been fit all week and has trained. I thought he was full of running, enthusiasm and energy, and furthermore he scored a very important goal. The first goal in a game like this is always the important one, and Glen got it.

"Glen Johnson is a top-class player, we all know that, and it was nice to see him play so well today and show the fans how well he can play."