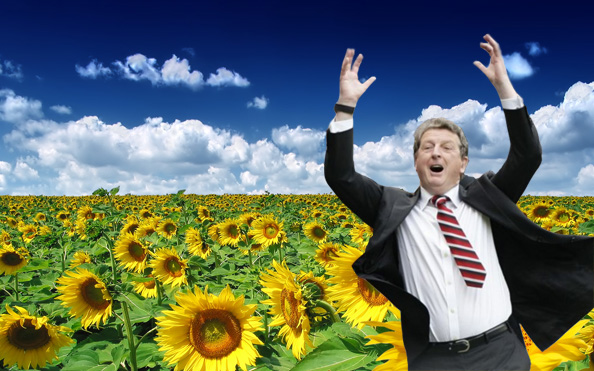 "I'm beginning," he says, "to realise there is grit in the team as the wins against Blackburn and Bolton show we are capable of standing up to the test."

"Well sure," I say, "but with the way most of these players used to be comeback kids in that almost there season, I'd have thought it was obvious? Unless you mean Poulsen showed some great fight keeping a chair warm on the sidelines, because really, it's a couple of your signings whose ability to show up under pressure is... okay, sorry. Never mind."

He doesn't seem to have noticed, and continues talking: "I'm hoping we'll be able to build on that and get ourselves back to where we think Liverpool FC belongs."

"Yeah, yeah. Me too, I guess. And a win is a win, so maybe I shouldn't quibble when you still decide to sorta throw the players under the bus. I mean, hey, the safe money is that no matter what your record is this season you aren't in the long term plans of Henry and NESV and it's just a question of how long it takes them to get solidly integrated into the game and if there's somebody they want now or if they feel it's wiser to hold out until summer. I mean, you're gone no matter what, probably, so maybe I should just enjoy the wins now that we've finally got a couple and not let you get to me?"

"When you get the ball you've got to try and pass it," he says, as always off in his own little world, "and I think that's what we did throughout the game."

"Wait, are you saying that you can teach an old dog new tricks? Because I'm pretty sure it was, 'When you get the ball you've got to try and hoof it,' right up until a week and a half ago."

"It's been a good spell, I always knew we were capable of this spell and also always knew that the clouds would pass."

"Well," I say, "I'm not sure a nervy win over Bolton and some puzzling subs is the clouds quite past yet. And they only started to clear out when that industrial super-fan leaf-blower got dragged in and pointed at your thirty-five years of experience..."

"I can only emphasize to our fans that we are still thinking about restructuring."

"Oh, you're still talking, Roy? You couldn't just stop on a not-horrible note? You had to refer back to your 'I need 5-6 new players to compete because the squad Rafa left me is ten times worse than Fulham's" dribbling that I'd call a rant except rants tend to need to be rant-y and not senile meanderings?"

"There's a lot of work for the new owners to do to help us in this respect," he says, continuing to focus more on what he's saying than on me as he sits beside my hospital bed, "but I think they will be happy at least that they have got a group of players who've got a lot of fight, spirit determination and a lot of quality."

"Right, so now they have a lot of quality again. How hard would it have been to just skip to the positive stuff? Look, I'm sorry I'm so snippy, and it is nice of you to come visit, even if I'm pretty sure the burst blood vessel had something to do with listening to you. But do you really think Chelsea's gonna be the same kind of game as Bolton and Blackburn? I mean, even against Bolton when they started to press we were too willing to start moving our lines back, and if we go back to the early season deep defending against Chelsea, well..."

"It will be a fantastic atmosphere at Anfield. We're not playing that badly and we'll give them a good game."

"Hmm, well, I'd prefer a little more than, 'We'll deserve our participants medals and trip to the pizza shop after the match,' but I suppose I've heard worse."

"At least we go into that with 12 points, which is a hell of lot better than nine!"

"And at least I didn't come out of this chat with you with any serious bodily harm! I mean, I think if you'd started blaming Rafa for all your failings this time I might have broken my leg jumping out the window trying to escape. So it's silver linings all around, I guess?"

"Oh, nothing. Nothing. Just don't let Napoli on Thursday turn into an excuse to play Poulsen on Sunday. And don't play Meireles on the right. Oh, and try not to say anything fucktardedly daft as the week goes on. After all, you did start the last one sounding entirely decent before you completely lost the plot there at the end."

"Well, the week is as long as the day is short."

"I don't even know what that means, but it frightens me."